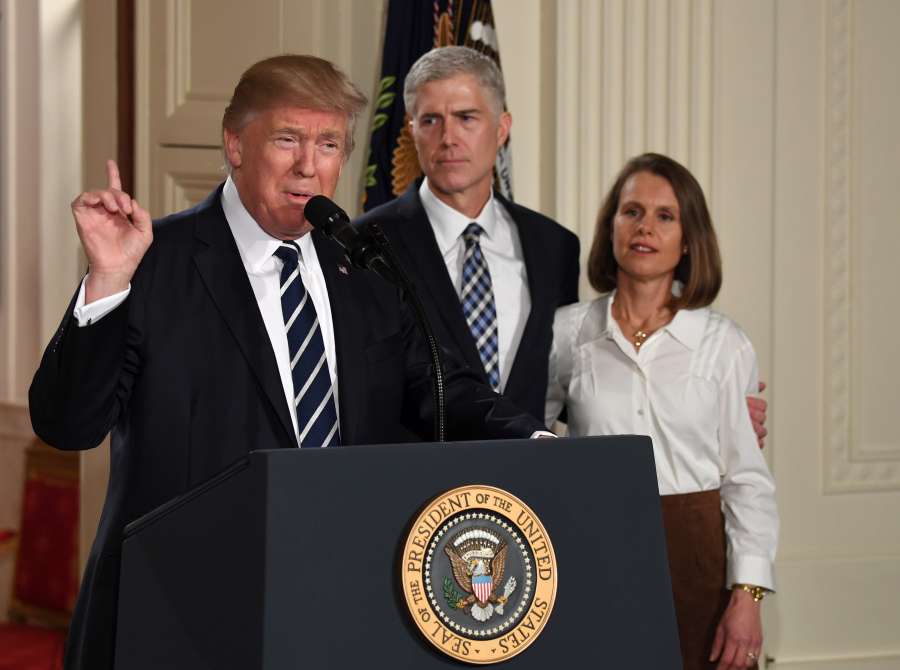 They said he wouldn’t or couldn’t do it. He did it and is doing it with a vengeance, roiling foes and friends alike at home and abroad.

And in the midst of all the turbulence created by his executive pen, Donald Trump always finds the time to tweet — to trumpet “he did it” as also to change the conversation.

In the two weeks since he took over, the new President has signed over a score of orders from one to slash regulations to another pausing intake of refugees and travel from seven terror-prone nations.

As protests against what “the dishonest media”, as the Donald views it, called “a travel ban from seven Muslim-majority nations” caused confusion and chaos at airports across America, Trump was unruffled.

“Call it what you want, it is about keeping bad people (with bad intentions) out of country!” he tweeted.

He even made fun of opposition Democratic House and Senate leaders, Nancy Pelosi and “head clown” Chuck Schumer, for shedding “fake tears” for the poor Syrian refugees.

“Pelosi and Fake Tears Chuck Schumer held a rally at the steps of The Supreme Court and the mic did not work (a mess)-just like the Dem party!” he tweeted.

Trump also fired a defiant acting Attorney General Sally Yates, a holdover from the Obama administration, for “betrayal” for refusing to defend his order in court.

Then as the Democrats boycotted a few Senate panels to block the confirmation of some of his cabinet nominees over “ethical concerns”, Senate Majority leader Mitch McConnell changed the rules to do it anyway without them.

“If you can, Mitch, go nuclear,” Trump egged the Republican leader to similarly advance his new Supreme Court nominee Neil Gorsuch’s confirmation by stripping the required 60-vote threshold if Democrats try to put hurdles in his path.

Ever the showman, Trump rolled out the “terrific” conservative judge’s nomination in the Roosevelt Room of the White House at prime time keeping his final choice secret until the last minute.

And before former ExxonMobil CEO Rex Tillerson was confirmed as his Secretary of State, he took diplomacy in his own hands to do some “tough talking” with Mexican and Australian leaders.

As media reports citing leaks would have it, he told Mexican President that his “bad hombres” needed to “be knocked out” and abruptly ended a call with Australian Prime Minister over an Obama-era “dumb deal.”

“Do you believe it? The Obama Administration agreed to take thousands of illegal immigrants from Australia. Why? I will study this dumb deal!”

“Dumb or not,” the US would honour the deal, the White House said later while downplaying Trump’s “hombre” comments as “light-hearted”.

And in what pundits saw as a sign of return to normalcy, Trump told Israel that new settlements in the occupied West Bank “may not be helpful” in achieving Middle East peace without sounding admonishing.

His “desi” ambassador to the United Nations, Nikki Haley, also “strongly condemned” Moscow for “aggressive actions” in eastern Ukraine even as she voiced Trump’s desire “to better our relations with Russia”.

Trump also seemed in no hurry to lift fresh sanctions imposed by Obama in the waning days of his regime over Moscow’s alleged meddling in the presidential election to help the Manhattan mogul.

In response to an Iranian missile test, his administration imposed new sanctions aimed at Tehran’s ballistic missile programme. But he again made no move to tear up the Iran nuclear deal that candidate Trump had dismissed as a “disaster”.

But at a solemn National Prayer Breakfast in Washington, Trump told Americans that “We have to be tough” before he inexplicably mocked Arnold Schwarzenegger, who has replaced him as “The Celebrity Apprentice” host, for its poor ratings.

“Pray for Arnold,” he asked the audience only to have the Hollywood star hit back with a suggestion, “Why don’t we switch jobs?”

And on Groundhog Day Pennsylvania’s most famous groundhog saw his own shadow to “predict” six more weeks of winter.

But it failed to say how long the Democrats would have to keeping pulling their hair through a hair-raising Trump-era winter!