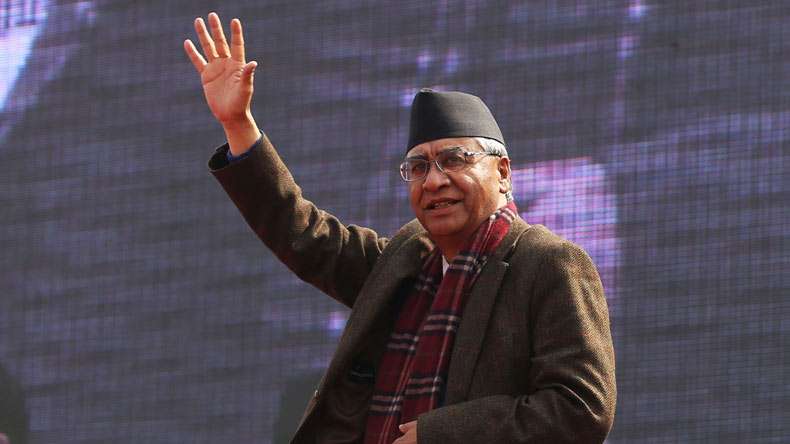 Sher Bahadur Deuba  returns to the post 12 years after he was removed from the post by then King Gyanendra.

Immediately after his election, he said his priorities would be holding the local elections and the constitution’s implementation. On foreign policy, he said he will maintain good relations with both India and China.

He had, while presenting his candidacy, said he will honestly work for implementation of the new constitution, and will brace his political acumen to address the grievances of the Madhesis and other outstanding political issues.

Seventy-year-old Deuba, who was elected for his fourth stint as Premier exactly a week short of his 71st birthday, received wide political support during the voting in parliament. Of the total 593 voters, 388 voted in his favour as opposed to 170 votes against — the main opposition Communist Party of Nepal (Unified Marxists-Leninists), as expected, cast their votes against him.

Two Madhes-based political parties also extended their support after reaching an agreement with him and outgoing PM Pushpa Kamal Dahal ‘Prachanda’, but ruled out joining the government.

Deuba’s victory was a foregone conclusion as none of the political parties fielded a candidate against him.

On May 24, then Prime Minister Prachanda had announced his resignation, in keeping with his agreement with the Nepali Congress, which had propped up his coalition government since last August. The two parties had agreed that their respective leaders would lead the government on a rotational basis where Prachanda would take the first nine months and the remaining nine would be of Deuba.

Deuba, who will be the 40th Prime Minister of Nepal, faces a huge domestic political challenge but foreign policy is more settled as his predecessor had almost brought relations with India and China almost back on track.

He will occupy the post for another nine months in a period considered a much challenging phase.

Apart from holding the second and final phase of local elections on June 28, Deuba’s other immediate priorities are to take confidence of the Madhesi parties in the constitution implementation process, bringing them on board in the local elections and holding other two elections — provincial and parliamentary — later this year.

Born in a simple family, Deuba, who hails from the country’s far west, is a well-respected leader for his participation in the struggle for restoring democracy in Nepal.

He was, however, criticised for surrendering democracy twice to the royal palace which removed him most unceremoniously in 2007, labelling him “incompetent”, after the Maoists joined the political mainstream.

A long time member of world socialist movement, Deuba has strong political connection to India and the West and exploited several opportunities as PM in the past from these two blocs.

Earlier, speaking in favour of Deuba, Prachanda said: “As the nation needs advanced political agreement to complete some historic tasks and keeping political and moral ground intact, as per the understanding reached with Nepali Congress, I am supporting the candidacy of Deuba.”

“Support by the outgoing PM to another incoming Prime Minister is probably a rare incident in world’s history,” he added.

In his statement prior to the election, CPN(UML) Chairman — and a former Premier — K.P. Sharma Oli stated that all sides came to an understanding for pursuing the second phase of local elections with the first phase having been completed on May 14 and for meeting the goal of holding the provincial and parliamentary elections later this year.