“We were in a festive mood just after the celebrations for the Bengali new year. All preparations were made to harvest our crops but the sudden heavy rainfall and flash flood destroyed everything,” says Shafikul Islam, a farmer from Tahirpur Sadar in Sunamganj district, north-eastern Bangladesh….A special report by By Zobaidur Rahman Soeb and Soumya Sarkar for Asian Lite News

“The flood from Meghalaya (in India) submerged our farmlands, breaking the embankments. We lost everything.”

Islam’s lament is depressingly familiar in the bowl-shaped wetlands — called haors — in north-eastern Bangladesh, where thousands of farmers like him lose their crops to severe flooding whenever it rains heavily in the southern reaches of Meghalaya. Known as the wettest region of India, Meghalaya (“abode of clouds” in Sanskrit) receives, on average, 120 cm of rainfall per year. Whenever it rains there, people living around the haors in Bangladesh are apprehensive.

But this year’s flash flood was different says Istiak Sobhan, environmental specialist at the World Bank in Bangladesh. Usually the region experiences flash floods in mid-May when farmers have already harvested their spring crops, he said. But this year the region was submerged by a sudden flash flood in April, destroying the harvest.

The valleys of Meghalaya on the north of the ridge bordering Bangladesh do not escape unscathed from the rains. The incessant rains that flooded the haors at the end of April also led to a flash flood in Meghalaya’s south-west Garo Hills district, submerging houses and agricultural land, and causing damage to roads and fish ponds. In East Garo Hills, residents reported that the Simsang river was flowing close to the danger mark. Other rivers were also in spate.

Although the damage in Meghalaya was not very high, the loss to haor farmers in Bangladesh has been extensive. In Netrokona district alone, around 73,070 hectares of paddy fields were submerged. “This paddy would have produced at least 281,320 tonnes of rice, the current market value of which is nearly $1.2 million,” Bilash Chandra Pal, the Netrokona district agricultural officer, told the media. 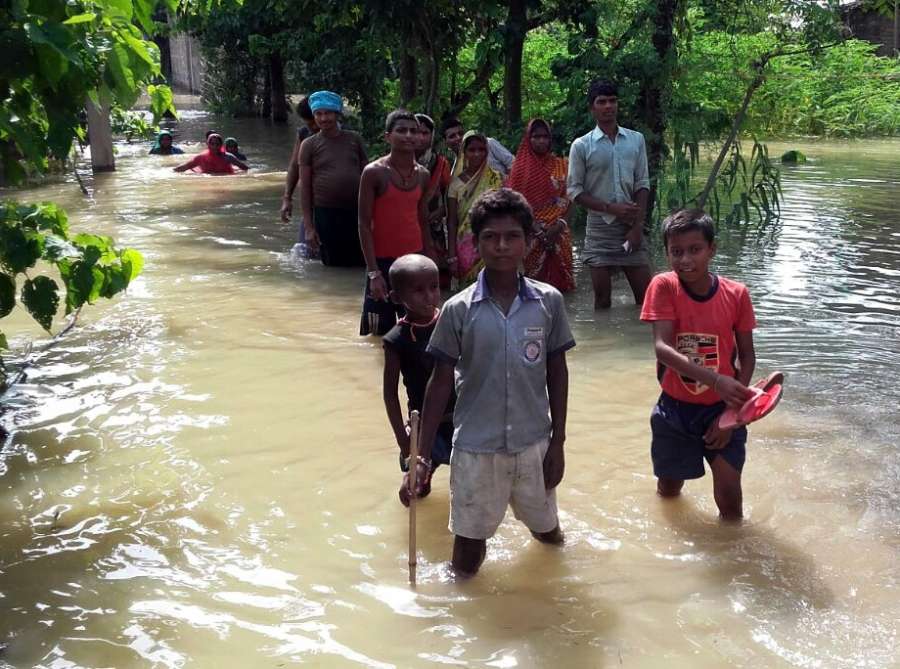 Boro is the major paddy crop in Bangladesh, accounting for 19 of 34 million tonnes of annual production in the country, according to the Department of Agriculture Extension. The damage to two million tonnes of rice will cause the country to suffer for the rest of the year, and its impact has already been noticed following a hike in the prices of staple foods in the market, says agricultural economist Quazi Shahabuddin.

In addition to the loss of a good harvest, farmers and fishermen in the affected region complained of fish dying due to water contamination. At least 300,000 farmers were severely affected, which also created an acute shortage of fodder, forcing distress sales of farm animals.

Duck farming is one of the major sources of livelihood in the haor region, but birds are dying due to the toxic gases and polluted water from rotten rice. People are leaving their homes and are forecasting a severe crisis of food and lack of livelihood in the area. The government has already banned fishing in a number of haors, which is a wetland ecosystem recognised by the Ramsar Convention.

Aziz Mia, a duck farmer who lives in Bishwambarpur, told thethirdpole.net that he had never seen such a flood in his life. He lost all 150 of his ducks and is now thinking of migrating to Sylhet city (Jalalabad) to look for work.

Although the role of climate change in flash floods such as these is yet to be firmly established, pre-monsoon rainfall and its intensity may increase in the future, according to a recent study by the Bangladesh University of Engineering and Technology (BUET).

There is a need to prepare for the erratic monsoon rainfall, says A.K.M. Saiful Islam, professor at the university’s Institute of Water and Flood Management and lead author of the study. But the annual damage to the haor region cannot be tackled by Bangladesh alone. Both India and Bangladesh need to exchange information on potential floods.