In seven years Indians will cross the 1.44 billion mark and the nation will go on to have a bigger population than China, according to a UN report….A special report by Arul Louis for Asian Lite News 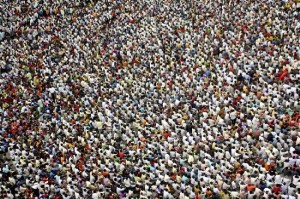 ‘The World Population Prospects: The 2017 Revision’ report released on Wednesday recorded two other dramatic facts: The fertility rate of Indians has more than halved over the last 50 years to 2.3 and Indians have added almost a decade to their life expectancy in the past 25 year which is now nearly 69 years.

“In roughly seven years, the population of India is expected to surpass that of China,” the report said, calling it a notable finding.

“Thereafter, India’s population is projected to continue growing for several decades to around 1.5 billion in 2030, and approaching 1.66 billion in 2050, while the population of China is expected to remain stable until the 2030s, after which it will begin a slow decline.”

After 2050, India’s population is likely to stabilise and begin to decline, going down to 1.5 billion by 2100, according to the report’s projection.

By then, China’s population would be a little over one billion.