Malaysia barred Tamil political leader Vaiko from entering the country and will sent him back to Chennai citing that he was on the Malaysian list of “dangerous persons” and number of cases on him in Sri Lanka….reports Asian Lite News

MDMK chief Vaiko was barred from entering Malaysia because of his known support for the outlawed and now vanquished Tamil Tigers of Sri Lanka.

The Tamil Nadu politician was detained at the Kuala Lumpur airport to be sent back to Chennai on Friday night, a party statement said.

Malaysian immigration officials told Vaiko, a former Indian MP, that his entry into the country was barred and escorted him to seniors for questioning, the statement said.

The officials reportedly told him that he was a part of the Liberation Tigers of Tamil Eelam (LTTE) and that there were a number of cases against him in Sri Lanka. The officials asked him a number of questions related to the LTTE.

When Vaiko said he was an Indian citizen and showed his passport, the officials told him that he was on the Malaysian list of “dangerous persons” and so cannot be allowed to enter the country, the MDMK said.

This was communicated to Vaiko by the Deputy Chief Minister of Penang province, Ramaswamy.

Vaiko had gone to Malaysia to attend the wedding reception of Ramaswamy’s daughter. He got the Malaysian visa in Chennai. 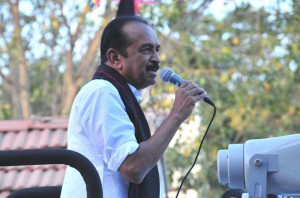 Ramaswamy told Vaiko that the efforts of Penang Chief Minister Lim Guan Eng to get Vaiko into Malaysia failed because the officials told him (Lim) that orders for the ban on the Indian politician’s entry had come from the Malaysian Deputy Prime Minister’s Office.

Vaiko was asked to sit in the immigration office and not to go anywhere, the party claimed, adding officials allowed an aide of Vaiko who travelled with him to get him something to eat. But Vaiko refused to eat.

The MDMK leader will be flown back to Chennai by the Malaysia Airlines on Friday night. Vaiko was quoted as saying that he was not harassed “but I have been kept in a place where I cannot meet anybody”.

Vaiko, who was earlier a senior leader in the DMK, has been one of the most vocal Indian supporters of the LTTE, which the Sri Lankan military crushed in May 2009. Vaiko used to count himself as a diehard supporter of the late LTTE chief Velupillai Prabhakaran.