It’s been a bumpy ride for a 65-year-old yellow cab driver, Gazi Jalaluddin. A good student who was forced to give up formal education due to poverty, he now runs two schools and an orphanage in his native Sundarbans, ensuring a smoother journey for the underprivileged in a land at the mercy of the rivers….A special report by Sahana Ghosh for Asian Lite News 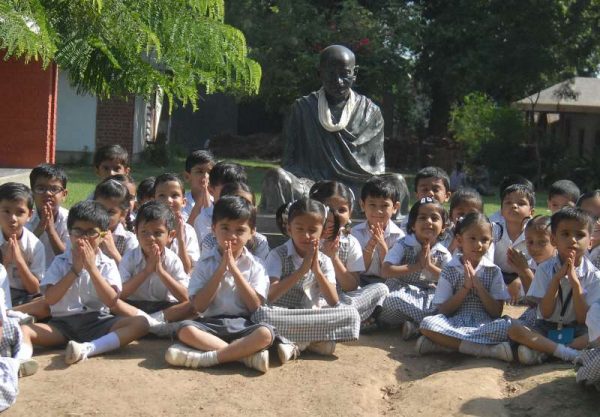 “I don’t know how much longer I will be able to keep it up through driving. My two sons are also driving and help in the endeavour. There are 425 students in total. Since it’s run as a non-governmental organisation (Sunderban Orphanage and Social Welfare Trust) we do not have access to government funds. I have tried communicating with the local district administration about assistance but to no avail,” the bespectacled Gazi said while taking a break from ferrying passengers.

Gazi’s schools are located in the Joynagar area of the Sundarbans (in South 24-Parganas district), about 60 km from Kolkata.

With a 25-member staff — 21 are teachers — the schools are completely dependent on the income from taxi rides, donations from good samaritans and passengers who are considerate enough to offer some money when they learn of Gazi’s unique venture.

His cab proudly displays his mobile number (9735562504) and an appeal for help with the message: “This taxi’s total income is spent for the development of orphans mission, Sikkhyatan mission and IIPF school for the orphans. So kindly don’t give any traffic case against this taxi.”

Citing his wife as an inspiration, Gazi revealed his family lives on the premises of one of the schools.

“I had to quit studies when I was seven years old. I had stood first in class two and was going to the next class. But my parents were unable to afford books; so I had to give up. That drove me to do something for the underprivileged,” Gazi reminisced without any pangs of remorse.

His dream of setting up a school finally took wing in 1998. But the road was not short and the journey was peppered with obstacles.

“I spent my boyhood begging on the streets of Kolkata and then I started plying rickshaws. Gradually I started driving a taxi. From 1980, I used to arrange books and clothes for children and ensure they went to school. I used to impart driving lessons to the youth to make sure they have a source of livelihood.

“When I reached a financially stable position, I started a small primary school with 16 students in the plot of land I own. I gave up the plot (four to five kathas) for school use. That became bigger with the acquisition of more land and is now a school-cum-orphanage,” he explained.

Later on, through donations of land, he acquired around seven kathas from locals and passengers. This became the site for his second school.

“In both the schools, students are taught till Class 4 and in one we have recently introduced Madhyamik (Class 10 board exams under the West Bengal education board). My earnings through taxi rides is around Rs 450 (a day). The money that is left from food expenditure and maintenance of the vehicle goes to the schools.

“I want to expand the schools and target secondary and higher secondary education. I have faith in people and hope they come to our aid as poverty is still the root cause of unemployment and lack of education in the Sundarbans. Life is difficult for the people in the remoter areas due to natural disasters. Education will go a long way in helping them achieve self-sufficiency,” Gazi signed-off on his way to pick up another commuter.