Media is becoming asinine and even at it’s worst the Jerry Springer genre or Rush Limbaugh did not sink to this LCD of inanity. The media even during the trials of OJ Simpson and Oscar Pistorius were circumspect in that they gave scenarios not verdicts….writes Bikram Vohra

I first met Shashi Tharoor at Bahrain airport when he was hoping to touch the stars and be made Secretary General of the UN. Well known local journalist Meera Ravi was with me and in my capacity as the editor of several papers in that region he wanted to share his blueprint to win votes from the Middle East bloc. His wife Sunanda Pushkar I met occasionally just to socially say hello how are you.

Ergo I don’t know them (or didn’t) very well except for these minor sorties. But I would never presume to accuse a man of murder in private or public and certainly not as a part of a talk show. I have no idea whether he is a murderer or a saint but I would not have the misplaced hubris to take a talking part in the theatre of the grotesque and go on TV or radio to give my assessment of a man’s guilt. That is why we have a judicial system which satisfies the adversarial process.

Let them decide and if they find him guilty so be it make him pay the price. But you cannot pillory him on public platforms without being culpable for slander and even worse. Mr Arnab Goswami, the anchor Republic, on one show is almost salivating as he goes on with that revolting lynch mob monotone: we are coming for you Mr Tharoor, we are not going to let go.

Who are these audio-visual moral police and when will they be unmasked as performers of non journalism. This is not journalism. While Arnab continues an attack that probably appeals to his fan club who see this as a crusade and not a horrific miscarriage of due process.

In a line that never ends come ageing socialites, writers, people of peripheral consequence in the arts and sciences and other somebodies from the professional fields simperingly eager to add their two bits to the destruction of Shashi Tharoor not by innuendo but by willing desire.

Were we of another generation all wrong? When we were taught that journalists had a solemn duty to safeguard the interests of the public and be watchdogs sentinels not rabid Rottweilers. 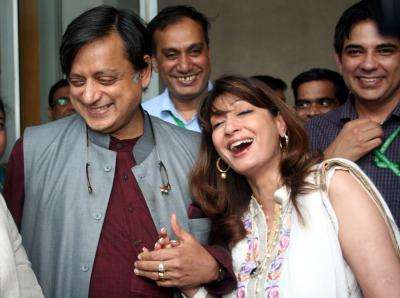 The anchors have gone so overboard and the serious ploughmen and women of the fourth estate docilely dispatched to the gas chamber of silence that even when they make a squeaky display of protest or caution are accused of cowardice and an absence of courage. At best, pure envy at the success and wealth of this tribe.

Since malice is now our fuel nothing is surprising not even an anchor last week who pompously offers us a solution to the odious crime of rape. All men should be confined to their homes after 6 pm. This grand eloquence is received as sound advice…let himlead the pack and stay home.

Media is becoming asinine and even at it’s worst the Jerry Springer genre or Rush Limbaugh did not sink to this LCD of inanity. The media even during the trials of OJ Simpson and Oscar Pistorius were circumspect in that they gave scenarios not verdicts.

The readers out there yelp in Pain if you critique these anchors for over extending their brief.
That could possibly be because they mistake dross for substance and actually believe these men and women are displaying badges of red hot courage.

We are no better these days than a white lynch mob in Mississippi stringing up a black slave while passing the bottle around.

And we will pay a price when the conditioned masses sharpen the guillotine and oil the wheels of the tumbrill. Get them out of their homes and wipe them Out they are the enemy. Like is there nobody out there who says, one second in the same time frame that Tharoor sues Arnab this savior goes for the jugular…huh!

Nothing personal, purely a professional coincidence.