Four years after the flash floods brought death and destruction in this Hindu pilgrim destination in Uttarakhand, its horrors continue to haunt the locals. Reconstruction and relief work have been steady but slow in the devastated area….writes Sidhartha Dutta and Ashish Mishra

Of the 113 private lodges, houses and shops that were totally destroyed in the Kedarnath Valley, construction of just 40 have been completed at a cost of Rs 38.43 crore, according to officials.

“The second phase of rebuilding the remaining 73 houses will be done in due course. The funds for the second phase of work have not been released yet,” said Santosh Naudiyal, officer in-charge of restoration work at the Rudraprayag District Magistrate’s office.

Naudiyal added that, out of the 120 pilgrim cottages which were sanctioned by the government, 70 have been completed in Kedarnath valley at a cost of Rs 29.7 crore.

A three-tier wall has also been constructed in Kedarnath to protect the temple.

Not many wish to recall those horrific moments when flood waters, triggered by the melting of the Chorabari glacier, also known as Gandhi Sarovar, following days of heavy rains, caused devastation across an expanse of 40,000 sq km, leaving thousands dead and several thousands more homeless. 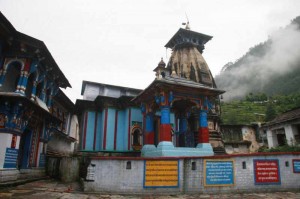 “I don’t want to recall those horrific moments. Let it be. I was near the Kedarnath temple when the flash floods hit the valley. I took refuge inside the temple,” said the caretaker of a hotel that was destroyed in the floods and later rebuilt.

As very few new hotels have come up in the valley, the state government has set up small tents for pilgrims, where they are provided a sleeping bag each.

The locals in Kedarnath believe a huge stone (called Bhimsheela), saved the temple (dedicated to Lord Shiva) from being swept away, like the rest of the buildings in the area, by the raging Mandakini river, which had swollen to monstrous proportions.

The entire uphill trek from Gaurikund to Kedarnath (about 19 km) was dotted with thousands of mules and palanquins carrying pilgrims from across the country. The trekking track had been washed away, but its reconstruction was completed in 2015, the year the yatra resumed.

Bhaurao Shinde, 65, was sitting on a bench outside the temple after the darshan. Shinde, a resident of Kolhapur in Maharashtra, said he had been coming here for the last three years.

“I came here for the first time in 2015. That year crowd was very less because people were afraid of another 2013-like tragedy. It is faith that has been bringing me here,” Shinde said.

Anil Kumar Uniyal, owner of the Madhuban tourist lodge, said Kedarnath, Rambara, Gaurikund and Sonprayag were the worst affected places due to the floods.

“The government has done the reconstruction work only in Kedarnath Valley. I had a lodge in Gaurikund, which was also destroyed. I have received only Rs 2.45 lakh from the government. This is not enough. It was a 20-room lodge,” said Uniyal, who escaped from Gaurikund with his family during the floods.

“We also had a property and our house in Gaurikund. Finally we settled down in Guptkashi. The government has not reconstructed our house,” he added.

According to officials, people whose houses were not fully damaged have been given compensation. “Those who lost their property or land in the floods in Sonprayag — for them, shops have been constructed at safer places, at least 200 metres above the river bank,” said Naudiyal.

“In Sonprayag, we have constructed 10 shops. It will be issued to them (victims) soon. In Gaurikund, the work on the Garam-Kund (where pilgrims have a bath before they begin the trek to Kedarnath) is under way,” he added.

Akhilesh Trivedi, an official at the Guptkashi resettlement department of the state government, said about 347 families have been financially compensated at a total cost of Rs 23 crore.