Kerala’s famed wetlands face multiple threats, including from rapid development activities and unscientific land use, according to a book authored by experts….reports Asian Lite News 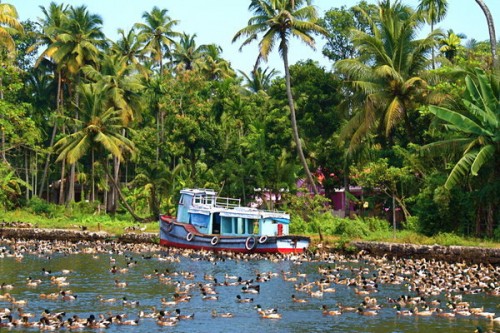 Large-scale reclamation, pollution and deforestation are also causing the area covered by wetlands to shrink, says the “Biodiversity Richness of Kerala” (Kerala State Biodiversity Board).

Authored by K.P. Laladhas, Preetha N. and Oommen V. Oommen, the 462-page book says that the wetlands were being reclaimed with soil extracted from levelling of hillocks.

“The indiscriminate activities will have a serious negative impact on the entire ecological system,” the authors warn.

Wetlands also provide a temporary or permanent habitat to a variety of plants, fish and wildlife as mammals, amphibians reptiles and birds by providing food, habitat, breeding grounds and shelter.

The book says that the riverine ecosystem of Kerala was also subjected to human pressures, altering the hydrological regime and causing enhanced siltation.

Deforestation for various purposes including timber, agriculture and forest plantations, dams, roads, encroachments and mining had affected the water holding capacity of the catchments, drying up the rivers, it says.

The authors warn that over-exploitation and unsustainable harvesting of medicinal plants was a threat to their sustainability.

According to the book, 50 per cent of the medicinal plants were harvested destructively.

“While the demand for medicinal plants is increasing, their survival in their natural habitats is under growing threat.

“Several medicinal plants have been assessed as endangered, vulnerable and threatened due to over harvesting in the wild.

“It is expected that around a 1,000 species of medicinal plants are facing threat to their existence in the wild.”

Packed with a wealth of information, the book is packed with colourful photographs of both the nature’s beauty as well as the stark reality of human interventions on environment.

Kerala constitutes only 1.18 per cent of India’s geographical area but it accommodates 25.69 per cent of the flowering plants in the country, says the book.