In a surprise development, Prime Minister Narendra Modi has ‘ejected Father of the Nation Mahatma Gandhi in the 2017 wall calendar and table diary published by the Khadi Village Industries Commission (KVIC)….writes Quaid Najmi 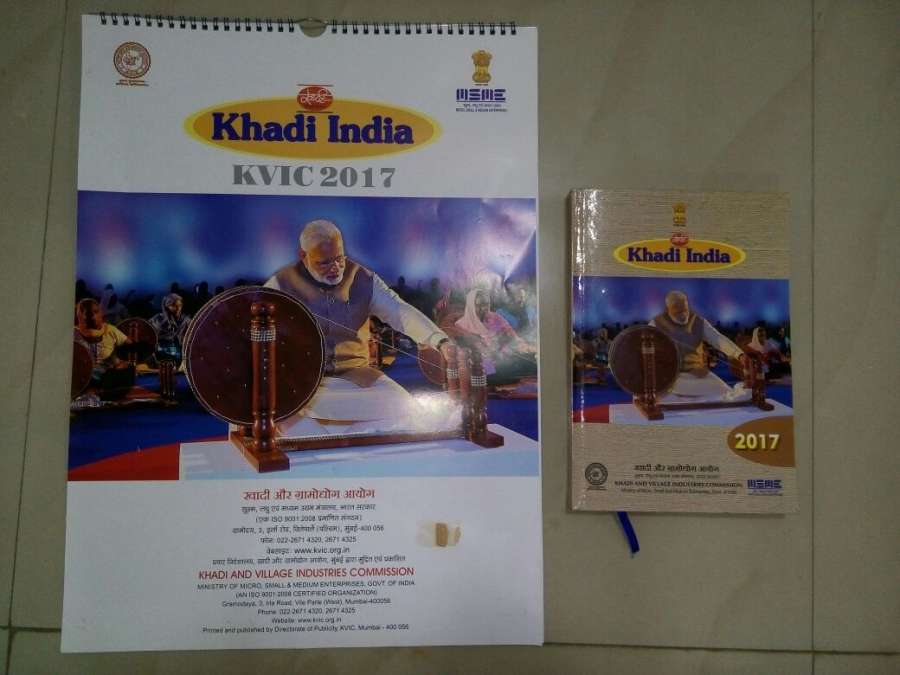 Most employees and officials were taken aback to see the cover photo of the calendar and diary showing Modi weaving khadi on a large ‘charkha’, in the same classic pose as Gandhiji.

While Gandhi’s historic picture weaving khadi on a simple charkha, wearing his trademark loin cloth, is legendary and imprinted in the minds of the masses since generations, Modi comes across in his signature attire of kurta-pyjama-waistcoat, weaving khadi on a slightly modern charkha.

Virtually rendered speechless, employees of KVIC at its Vile Parle headquarters plan to stage “a silent, soul-cleansing” protest wearing black bands on their mouths, during lunch hour on Thursday.

When contacted KVIC Chairman Vinai Kumar Saxena said this was “not unusual” and there have been deviations in the past.

“The entire khadi industry (udyog) is based on Gandhiji’s philosophy, ideas and ideals, he is the soul of KVIC, so there is no question of ignoring him,” Saxena told IANS.

He added that Modi has been wearing khadi since long, and has popularised it among the masses and even among foreign dignitaries, while developing his own styles around khadi.

“In fact, he is khadi’s biggest brand ambassador, and his vision matches KVIC’s, of ‘Make In India’ by making villages self-sufficient, ‘skill development’ by generating employment among the rural masses, infuse modern technology for khadi weaving, innovations and marketing. Plus, the PM is a youth icon,” Saxena explained.

“We are pained at this systematic easing out of Mahatma Gandhi’s ideas, philosophy and ideals by the government. Last year, the first attempt was made by including the PM’s photos in the calendar,” said a senior KVIC staffer, requesting anonymity amid fear of official reprisals.

In fact, in 2016 the staff unions in KVIC had raised the calendar matter strongly with the management and were assured that it would not be repeated in future.

“However, this year it’s a total washout. The pictures and teaching of Gandhiji – who created khadi for the poor masses and made it a symbol of the ‘swadeshi’ self-reliance during the struggle for Independence – are completely left out in the calendar and diary,” the staffer rued.

Incidentally, Modi already has a khadi garment unofficially named after him – the casual and comfy, half-sleeved ‘Modi Kurta’ – since the days he was Gujarat Chief Minister and sported it regularly in public in various shades and styles.

During the four-month period between Gandhi’s birthday on October 2 and his martyrdom on January 30, the KVIC launches special promotions and offers special rebates to boost khadi sales across India.