At least six train accidents in little over three months of 2017 have, once again, raised serious questions about the safety of rail passengers in the country….writes Vishav 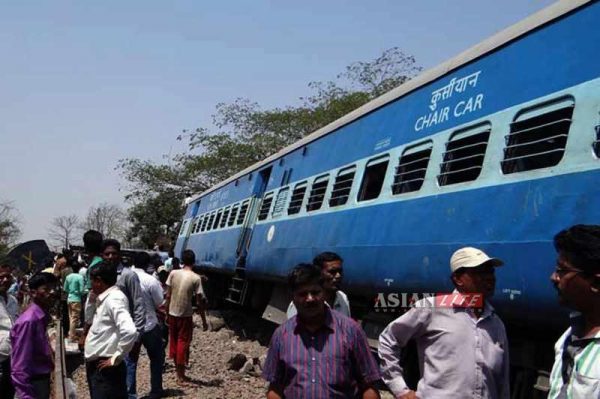 Eight coaches of a passenger train derailed near Rampur in Uttar Pradesh on Saturday, injuring at least 14 passengers and affecting the movement of over 25 trains.

In the last week of March, around 52 people were injured after eight coaches of the Jabalpur-Nizamuddin Mahakaushal Express derailed near Kulpahar station in Uttar Pradesh.

In January, more than 40 passengers were killed and over 50 injured when the Hirakhand Express derailed near Vizianagaram in Andhra Pradesh.

There have been other accidents like a train ramming an ambulance at an unmanned level crossing in Karnataka last month, derailment of three coaches and engine of Kalindi Express in February, and a goods train train in Howrah-Kharagpur section in West Bengal in April.

These incidents again put the spotlight on a serious question: How safe is it to travel on Indian Railways, the fourth largest railway network in the world that transports more than 22 million passengers daily.

According to a December 2016 report of the Standing Committee on Railways, focusing on safety and security, about 70 per cent train accidents in 2015-16 in India occurred due to deficient working of railway staff.

As per the report, lapses of railway staff included “carelessness in working, poor maintenance, adoption of short cuts and non-observance of laid-down safety rules and procedures”.

“The trend has been replicated throughout the years where failure of the railway staff is a major cause of consequential railway accidents,” the report said.

Shiv Gopal Mishra, General Secretary of All India Railwaymen’s Federation, said fund shortage for track maintenance is a major reason for such incidents.

“At least 40 per cent Indian Railways tracks are overdue for renewal. Till that happens, such incidents will continue and no one will be able to stop the same,” Mishra said.

“Responsibility should be fixed for this utter neglect. If the government doesn’t pay, it should be held responsible. And if it gives the funds but people in the Railways don’t use it, then they should be held accountable,” he said.

The Indian Railways network is over one lakh km long, spread over a route length of around 67,000 km.

However, Mishra feels that funds would lead to results only if priorities are set right.

“It’s being said that the Rs 1 lakh crore fund will be used to build new tracks instead of revamping/repairing the existing ones. What about the old tracks?”

Mishra said overburdening of some tracks may also be responsible for increased wear and tear, leading to accidents.

“Some tracks are used more than their bearing capacity. When there is more load, it is natural that there is more wear and tear. It’s also something that needs to be looked into.”

Former Railway Board Chairman Arunendra Kumar said for the Indian Railways safety is the topmost priority.

“We have been running trains since 1853 and safety is basic thing which is considered before any new train or technology is introduced,” Kumar said.

He said while some things may be more safer than others, “it doesn’t mean that the Indian Railways is running trains unsafely or under unsafe situations”.

He said one needs to analyse the reason(s) behind Saturday’s train accident before jumping to conclusions.

“Accidents never follow a pattern. There are so many reasons/factors involved,” Kumar said.

“We have to see why this particular accident happened — what was the reason? Was it because of neglect, technological flaw or reasons beyond the control of the Railways, or was it human failure?”