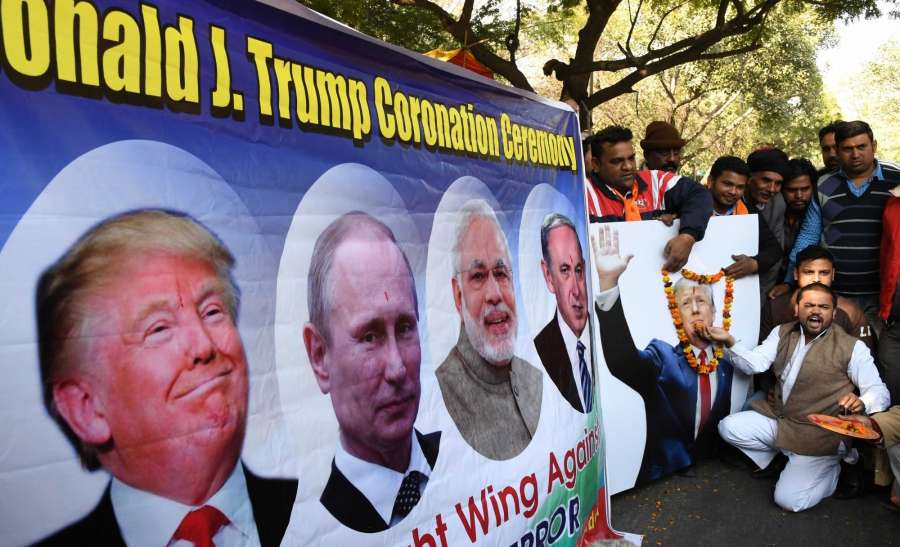 The post-9/11 global war on terror was officially launched with attacks on Afghanistan on October 7, 2001. It was exactly on that date that Narendra Modi was sworn in as Gujarat Chief Minister for the first time. He had been sent from New Delhi to replace Keshubhai Patel but was not even a member of the Vidhan Sabha.

The coincidence mentioned above is probably not relevant, but it is an interesting detail. Extensive coverage accorded to the anniversary of the 2002 Gujarat Riots has brought back images.

A distinctive feature of the riots has remained unnoticed. This was the first time in history that authors of a communal conflagration had taken advantage of the anti-Muslim sentiment televised globally in the context of the global war on terror. In the world beyond India, Gujarat was muffled by the din and the fireworks in Afghanistan. But the global anti-jihadist atmosphere was a shot in the arm of communalism in India. This aspect of globalisation added a shade or two to Indian saffronisation. This deepening saffron was to come in handy in the February 2002 Gujarat riots — and subsequently.

In a sense, the tussle between hard and soft saffron within the Bharatiya Janata Party (BJP) during Atal Behari Vajpayee’s Prime Ministership was won by the hardliners when Pakistan’s Gen. Pervez Musharraf was sent away empty-handed from the Agra summit in July 2001. Vajpayee and his Foreign Minister, Jaswant Singh, were inclined towards improved relations.

Within two months of Agra, 9/11 happened, generating a global atmosphere which was a Godsend for the hardliners. New Delhi began to dream dreams: it would now be in the first league fighting Islamic terror. But Americans had their own priorities. Pakistan, an ally since inception and having a long border with Afghanistan, was enlisted as the frontline state in the global war.

It was a piquant situation for New Delhi. Its plaint in all global forums had been that it was persistently plagued by cross-border terrorism from Pakistan. And now on the big occasion, Pakistan had been given the pride of place to wage war on “global” terror.

I can never forget the lunch at US ambassador Robert Blackwill’s round table. Pranab Mukherjee, then an opposition leader, asked the ambassador: How could Pakistan, which was the source of terrorism in India, be invited by the Americans in the global war against terrorism?

Blackwill’s reply was unforgettable: “Yours is an old regional quarrel; what Pakistan is fighting with us is the global war on terror.”

It was only after the December 13, 2001, attack on the Indian Parliament and the subsequent military mobilisation bringing the neighbours with nuclear weapons in an eyeball-to-eyeball confrontation, that the Americans pretended to shift gears.

The situation was full of ironies. Two nuclearised neighbours, rearing to fight each other, were extraordinarily yoked together by the mightiest power (remember the US was still basking in the sole super power moment) to fight global terror.

In a situation so conducive to saffronisation, state elections to the key state of Uttar Pradesh suddenly covered the horizon. It would naturally be a hardline campaign. I still remember the then BJP President Rajnath Singh, going hammer and tongs at SIMI (Students Islamic Movement of India). Kar sevaks (volunteers) in their hundreds of thousands would be allowed to assemble in Ayodhya. They would be allowed to nurse expectations that a BJP victory in the state would be a signal to build the temple.

At the moment of victory, Lauh Purush or the Iron Man, Home Minister, L.K. Advani, would rein in popular enthusiasm in Ayodhya. The BJP would assert itself as the “party of governance”. But the earth moved from under the feet of the Kar sevaks and, indeed, every BJP supporter, on February 24, 2002, when the results came in. BJP had lost. It must have been in a state of high agitation that Kar sevaks boarded the Sabarmati Express on its 30-hour journey from Ayodhya (Faizabad) to Ahmedabad.

In a detailed report on the anniversary of the riots, Deeptiman Tiwary of the Indian Express quotes an eye witness, Umesh Chandra Dixit, who boarded the Sabarmati Express on February 26, 2002. He and four others were pushed out of the train by “Kar sevaks from Gujarat”. It was the S6 coach of this train that was gutted in Godhra, killing 59 passengers; all, according to officials, Kar sevaks.

The day the BJP lost Uttar Pradesh, it also lost two by-elections in Gujarat. It was in these unhelpful circumstances that Modi eked out his first electoral victory from Rajkot. But the overall mood in the BJP camp was of having been vanquished. Then, on February 27, Gujarat was ablaze.

The late founder and chief of the Vishwa Hindu Parishad, Keshavram Kashiram Shastri, made a rare admission. In a remarkable interview to Sheela Bhatt of Rediff, he owned up.

When I met Jayanti Ravi, Collector of Godhra, a few days after the riots, she could not be very helpful. She was not handling the case. It had been quite unusually handed over to Vijay Vipul, Director General, Anti Terrorism Squad. No preliminary investigation had been done. Remember, after 9/11, terrorism was the global flavour.