Former Delhi Chief Minister Sheila Dikshit says It is not easy for now to forge a united opposition against Prime Minister Narendra Modi but a challenge to him will emerge in 2019….writes Sidhartha Dutta 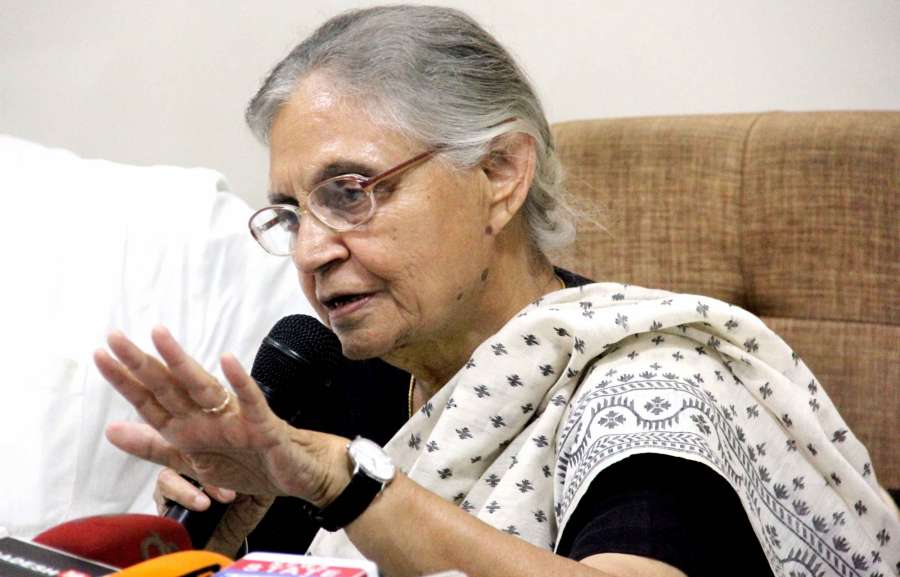 The Congress leader also said in an interview that the country’s oldest political party cannot do without the Gandhis and that Vice President Rahul Gandhi “is coming up well”.

Speaking on a variety of subjects, Dikshit, who ruled Delhi for 15 long years until 2013, also said she would never, ever join the Bharatiya Janata Party (BJP).

Asked about talks among opposition parties to take on the BJP, Dikshit said there was a lot of talk on an “anti-communal agenda”.

“I do hope it (opposition unity) works out. But it has to be worked out very carefully. People have to learn to accept each other,” Dikshit said, and added: “They at the moment are individualistic.

“In the interest of the country, this will be good. Nothing has come out substantially so far,” she added.

Dikshit asserted that the Congress needed the Gandhi family’s “unchallenged leadership” — a reference to party president Sonia Gandhi and her son Rahul Gandhi.

“The Gandhi family has served the country and the Congress for decades. The Congress ruled India for 70 years … because of the guidance of the Nehru-Gandhi family.”

Several Congress leaders have quit the party in recent months, in Delhi and elsewhere. Most have blamed Rahul Gandhi for providing “poor leadership”.

Asked if she could ever join the BJP, Dikshit shot back: “No question, not even in my next birth… Ideologically, we are very different.”

Answering a query, Dikshit said promoting local leadership was important for the Congress.

“Indiraji (Indira Gandhi) and Rajivji (Rajiv Gandhi) used to bring up local leaders… Little changes here and there in attitude may help us,” she said, in an oblique reference to problems within the Congress.

Dikshit, who was initially named the Chief Ministerial candidate in Uttar Pradesh, said state unit chief Raj Babbar and General Secretary Ghulam Nabi Azad must own up for the Congress rout in the state.

The Congress won only seven of the 105 seats it contested in the 403-member assembly.

Asked if Rahul Gandhi was not to blame for the debacle, Dikshit said the responsibility of Uttar Pradesh was given to others. “They should take it, the PCC president was there, there was General Secretary, there were others also.”

She admitted that the Congress-Samajwadi Party alliance “didn’t work. That’s a separate matter. In democratic politics, there is always a risk. It can work sometime, sometimes it doesn’t work”.

But she called for a proper introspection and the party should analyse the reasons for the defeat.

Dikshit insisted that the Congress will find a leader when the time comes to take on Modi.

Asked if she saw anyone in the Congress as a challenge to Modi in the 2019 Lok Sabha election, she said: “The Congress itself is a challenge. Don’t underestimate it.”

Asked if there was a leader of Modi’s stature in the Congress, Dikshit said: “(Former Prime Minister) Manmohan Singh did a very wonderful job. What is happening today, it was started and conceptualised by Manmohan Singh. When the time comes, we’ll find a leader.”

She said Rahul Gandhi was “coming up well. And he is taking on challenges… I am sure he will succeed at the end of it all”.

Dikshit said the upcoming organisational polls in the Congress would bring “new blood and churn the whole system”.