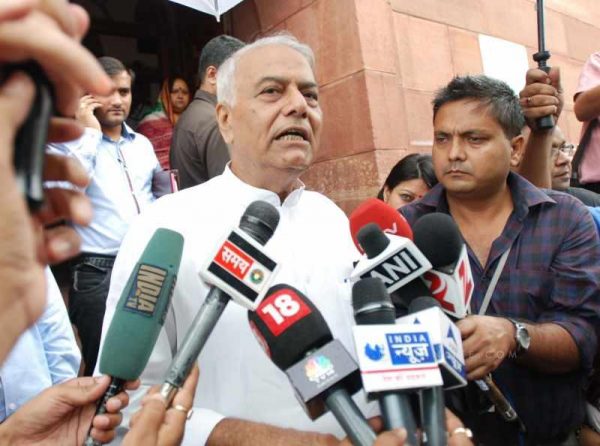 Urging the people to “stand up” to save the great tradition of parliamentary democracy, Sinha said that “darr” (fear) and democracy don’t go together.

“Mahabharata has been the flavour of the last couple of days… And characters from Mahabharta have suddenly appeared. Some people are talking about Shalya. I don’t know how much they know about Shalya.

On a serious note, Sinha observed that democracy is not merely numbers.

“The soul of democracy is consensus. So even if you have the numbers, you have to reach out to other people and parties to try and get them along,” Sinha said recalling the days in Indian politics when stalwarts like Chandra Shekhar and Atal Bihari Vajpayee (both former Prime Ministers) set high ethical standards in politics.

“Nobody talked about Mukt-this Mukt-that because we are all part of the democratic process and we know that democracy means discussion, debate and an evolution of consensus based on these discussion,” Sinha said in a clear attack on BJP’s “Congress-mukt Bharat” (congress-free India) slogan.

“And if debates and discussions don’t take place, consensus will not be there and that will kill the very fabric of democracy,” he said, stressing the need to have dissenting voices in a healthy democratic set-up.

Sinha said that the first lesson he learnt in politics from the likes of Chandra Shekhar, Vajpayee and L.K. Advani was that “whatever your political persuasions may be, don’t allow those differences to affect your personal relations”.

“So when I was approached to come to this function to release the book by Manish Tewari, I readily agreed…I know the company I will be photographed with. It sends some message. I must also say I really don’t care,” he said.

“Some people believe that at this ripe old age of 80, I am perhaps looking for a job. Now, I come from a part of the country that has produced a famous character. His name is Babu Kunwar Singh.

“Babu Kunwar Singh became a major freedom fighter in the first war of Independence of 1857. When he joined the war he was 80 years old. So there is no age bar for fighting for freedom,” Sinha said.

“Let me tell you that darr (fear) and democracy don’t go together. And we will all have to strive together. Because at the end of the day we have to maintain the greatest tradition of parliamentary democracy. Let us stand up and face it,” Sinha said.