The “Bahubali” or “fat boy” of Indian rockets — GSLV Mk III — weighs several tonnes more than some of the other expendable rockets in the world but its carrying capacity is far less….writes Venkatachari Jagannathan

The rocket powered by its own cryogenic engine at the upper stage, placed communication satellite GSAT-19 weighing 3,136 kg or 3.1 tonne.

“The GSLV Mk III rocket weighs 640 tonne with a capacity to carry four tonne satellite. But when one compares the ratio of the GSLV Mk III’s weight to its carrying capacity to geo transfer orbit (GTO – where communication satellites will be placed) with rockets of other countries, the former ranks low,” an industry expert saidon the condition of anonymity.

Sriharikota in Andhra Pradesh is the second best rocket launch site in the world, the expert added.

Agreeing that the GSLV Mk III payload to GTO as compared to other rockets is less, G. Ayyappan, Project Director, GSLV Mk III, cited a couple of reasons for it.

“From the rocket’s propulsion point of view, in foreign rockets, the lower stages (engines at the lower part of the rocket that are fired first to lift the rocket and make it escape earth’s gravitational force) are powered by semi-cryogenic or cryogenic engines,” Ayyappan said.

The thrust power of semi-cryogenic or cryogenic engines are higher than that of engines fired with solid fuel.

The GSLV Mk III is a three stage/engine rocket. The core of first stage is fired with solid fuel and its two motors by liquid fuel. The second stage is liquid fuel and the third is the cryogenic engine.

“We use solid fuel in the lower stages as it is cheaper than cryogenic fuel. Even other space agencies are looking to use solid fuel to cut costs,” ISRO’s Liquid Propulsion Systems Centre Director S. Somanath said.

“But other space agencies are looking at solid fuel to reduce cost only after their rockets carry far much heavier satellites than Indian rockets,” the space industry expert pointed out.

ISRO officials said the mass of communication satellites is also coming down and hence India may not need a heavy-lift rocket.

“Nearly 55-60 per cent of a satellite’s weight consists of its chemical fuel. Now the idea is to shift to electric propulsion of satellites which would reduce their weight,” Ayyappan pointed out. 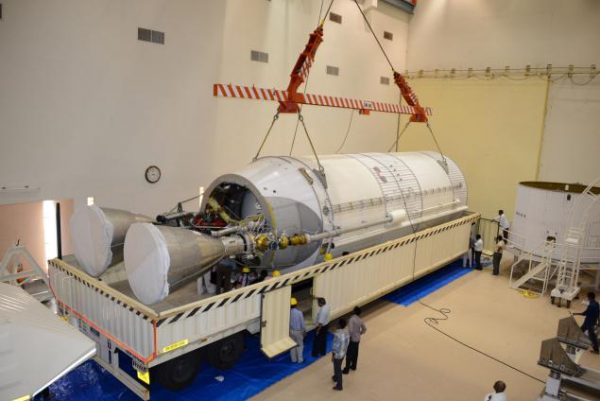 Somanath said: “ISRO started designing GSLV Mk III with four tonne carrying capacity when it was making two tonne satellites. At the global level also the weight of satellites are coming down. It is very difficult to predict the market trends.”

“The Chinese government approved the Long March 5 project sometime mid-2000 to have a rocket with a capacity of 14 tonne. The size of communication satellites will have to go up as there is limitation on the orbital slots. It all boils down to planning and also predicting the global trends,” the expert added.

Citing the example of Japanese H-IIB rocket, Ayyappan said the Japanese use lot of composite materials to make the rocket more efficient and light weight.

“In future we will also be using more composites in the upper stages instead of metal. Half of the rocket’s velocity is achieved only at the upper stage and composite will be the only choice in future,” Ayyappan said.

“The specific impulse of our cryogenic engine is also slightly less than that of others,” Somanath added while listing out other reasons for GSLV Mk III’s lower carrying capacity.

“The aluminium used in some foreign rockets are less dense and their weight is less. We will also use such materials to reduce the weight of our cryogenic stage by 500-600 kg,” he said.

Somanath said there are plans to reduce the weight of the electronics by around 150 kg so that every kilogram of weight reduced increases the payload capacity.

According to him, switching off and restarting of cryogenic stage in the space would also increase the rocket’s capacity.

Experts said India has to realise its semi-cryogenic stage faster and it can not have the luxury of spending a decade or more in developing newer rocket technologies.

“We are planning to realise the semi-cryogenic engine in 2019 and the entire stage by 2021,” Somanath said.