Dr. Shashi Tharoor, former under secretary-general of the UN, dons many hats with equal élan – a Congress leader, an MP from Kerala, the Chairman of the Parliamentary Standing Committee on External Affairs, and a much acclaimed and awarded author. In an exclusive interview with Ahmad Shariq Khan, The Dollar Business, Dr. Tharoor shares his views on the changing dynamics of global trade

TDB: The current state of global trade is not very encouraging. What ails the world of trade?

I have argued in the past that the age of superpowers is now history. What we are now witnessing is the emergence of a global network, in which India can be part of various blocs to serve various interests without a contradiction. This would be a world in which India would belong to and play a prominent role in, say, both UN and G-20.

Meanwhile, in the developed world, populist objections have given rise to globalisation in its current avatar. For instance, China’s trade with its western partners has brought vast benefits to consumers in the west. But it is equally true that large numbers of workers in the west have lost their jobs in the process. The response from leaders has been increasing political denunciation of global trade, hostility – even violence – towards foreigners – and the imposition of austerity measures, which also tend to hurt the poor more.

The poor and the unemployed, who then see that they have no stake in the globalised system, demand to know why government policies benefit people in faraway lands with what used to be their jobs and want to go back to the security of older, more familiar economic ways and the comforts of traditional identity. Protectionist barriers have begun to go up in those very nations that had for years advocated the free flow of goods, labour and capital. It’s striking that so many polls now show declining support for trade in the developed countries whose companies and consumers have most profited from it.

TDB: Are global institutions like WTO & IMF relevant in their present form?

ST: The institutions of global governance, whether it is World Trade Organisation (WTO), International Monetary Fund (IMF), or United Nations (UN), have served us well and ensured unprecedented prosperity and peace on a global scale. However, we have to face the fact that these institutions were designed in the post-World War II era and have not undergone adequate reform in the subsequent 70 years in a manner that is necessary to maintain agility, to address today’s challenges, and to make room for new powers that might not have enjoyed clout in the 1940s. Take for instance, the BRICS, which, in its original embodiment, was identified as those nations whose rapidly growing economies were challenging the size and preponderance of the G7.

Indeed, in the last 15 years, Brazil, Russia and India have caught up with the smallest G7 economy (Italy) in terms of nominal GDP, while China has overtaken Japan to become the second-largest economy in the world. Together, the nominal GDP of BRICS countries is similar to that of EU or US and will in all likelihood overtake both in the not so far away future. By 2040, the BRICS will account for more of world GDP than the original G7.

But, what is it that draws the BRICS close as nation states in their organised “rebellion” against the global order? As it happens, one major attribute all BRICS members share is exclusion from the place they believe they deserve in the existing world order. And being denied legitimate positions on the global stage by today’s dominant powers is proving to be a very strong glue that holds the grouping together and, at some level, causes them to look for alternatives. The five countries in the BRICS formation together account for 43% of the world’s population, 46% of the global labour force, 30% of the earth’s landmass and an equal share of the world GDP. Simply put, they are too big to be ignored anymore.

That is why it is clear that existing arrangements are no longer adequate, as the BRICS have demonstrated in their demand for greater clout and in their willingness to explore a smaller grouping to pool in their resources and push for a new order. The existing world powers, however, will not cede influence so easily. It is important to note that countries like China and India are not seeking to overturn the world order, and perhaps, there are lessons for the advanced west to take from their approach to seeking redress within the broad framework rather than destabilising the framework itself. All they want is a place at the high table.

The leaders of the developed west will have to reconcile to this, and make way with grace, instead of seeking to undermine institutions just because they are no longer in a position of privilege in those institutions.

TDB: How would you like to see India navigate through the power blocs while still maintaining a balance?

ST: I have argued in the past that the age of superpowers is now history. What we are now witnessing is the emergence of a global network, in which India can be part of various blocs to serve various interests without a contradiction. This would be a world in which India would belong to and play a prominent role in, say, both UN and G-20. In fact, India is the one country that is a member of all blocs and groups. So, we are already doing a good job of navigating the new world order where ‘multi-alignment’ may be a better defining term.

India is a country with remarkable potential. But, the fact is that economic potential may not always translate into economic success. We have a phenomenal demographic advantage in our young population. However, with a million men and women joining the workforce every month, if the rate of job creation doesn’t increase, it may well turn into a demographic disaster. I have often said that India cannot become a superpower of any kind while we are still super-poor.

TDB: How do you see the growing startup culture in India? What potential do you see for the Indian workforce?

ST: Indian innovation, or as some have called it ‘Indo-vation’, has already proved itself in remarkable ways. India’s Mission to Mars, for instance, cost us $74 million, which was about 11% of the cost NASA incurred for its own latest Mars programme at $671 million. An Indian company has invented a cheaper Hepatitis B vaccine, bringing down the price from $15 per injection to less than $0.10. But, while I am excited by the growing startup culture and our capacity as a society for remarkable innovation, I am worried by the lack of industry investments in a career path for innovation. What career do we offer in the industry for innovators? Of course, every graduating engineer cannot become a researcher, let alone an innovator. But let us try and understand why many of the brightest talents from our best institutes are not looking at a career in that space. While there may be attempts in some pockets, our technology industry has simply not created enough jobs for innovators. We have not glamorised the field enough. We have not provided enough incentives. Indian industry has to carry the torch of innovation as a mantra, if the country has to transition into the area of being a superpower in the hi-tech innovation space.

India, on the other hand, is resisting the trend. For all the nativism and religious chauvinism, the current government’s success has unleashed, as a nation, we remain resolutely committed to globalism and free trade, and the government’s new budget speaks of liberalising foreign direct investment even further. India continued to grow at a time when most countries suffered negative growth rates in at least one quarter in the last four years.

Indian industry is realising that its long-term survival and prosperity depend on its ability to innovate and become creators of technology, and not just consumers of it. Scale is an equally critical aspect. We are a country of over 1.2 billion people of diverse skills, and more important, with two-thirds of this number under the age of 35 – it is a no-brainer to use this demographic dividend to our advantage. We must think in terms of scale in whatever we do, and make sure that the steps we take in the area of research of innovation include a swath of stakeholders.

TDB: How do you see India withstanding rising protectionism?

ST: While there is no escaping globalisation, backlash against globalisation is clearly on the rise. Neighbours have become less welcome in these countries, international banks have become increasingly nervous about issuing loans abroad. The number of democracies has not reduced – but within these democracies, freedom has been slowly but steadily diluted. The developed world, not used to dealing with such problems and so many disruptive forces, seems to be retreating into a shell.

India, on the other hand, is resisting the trend. For all the nativism and religious chauvinism, the current government’s success has unleashed, as a nation, we remain resolutely committed to globalism and free trade, and the government’s new budget speaks of liberalising foreign direct investment even further. India continued to grow at a time when most countries suffered negative growth rates in at least one quarter in the last four years. But, it is important to recognise that it has taken a paradigm shift to get where we are in the world and that we still have several problems to overcome, most notably poverty, illiteracy, skilling and providing jobs. We have to ensure that we are, in this changing world, flexible in our international arrangements, even while we address domestic issues.

TDB: GST will soon be implemented. What are its downsides?

ST: There are lots of concerns, mostly related to changes that were incorporated by the present government to the draft bill put forward by the UPA government. For instance, five tax rates and then a luxury cess for some items above that will be a nightmare to administer. It will open multiple loopholes and provide opportunities for corruption. The number of items excluded from the purview of GST such as petroleum products, alcohol, tobacco, electricity, etc., is also alarmingly high. This in turn opens multiple opportunities for tax arbitrage amongst different states which can tax these items differently. I would have preferred a clean, simple national GST that would be applicable equally to all. I hope it turns out that a flawed GST is better than no GST.

TDB: How do we ensure that the benefits of India’s economic might percolate to the bottom of the pyramid?

ST: The magic of the market will not appeal to those who cannot afford to enter the marketplace. While it is good to aspire for 10-12% GDP growth, we must ensure that the benefits of that growth reach the bottom 20% of our people. The challenge is not merely about growth but also how we grow, and which Indians are benefitting from growth. 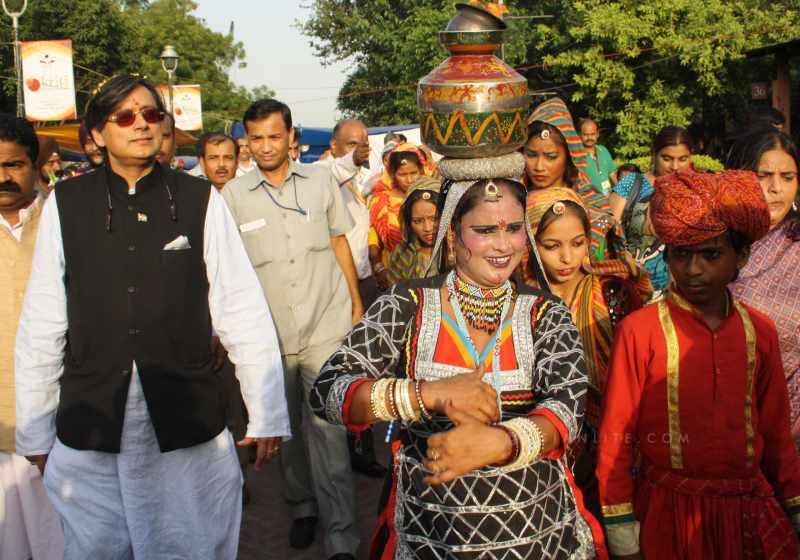