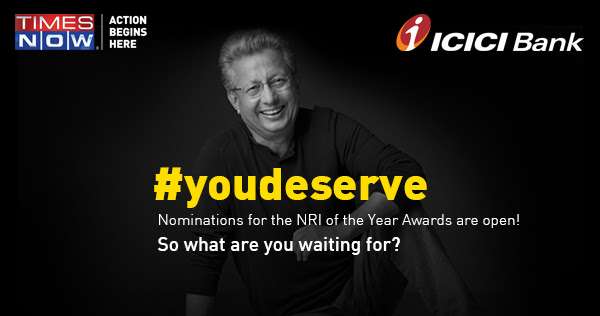 Indians across the world have managed to carve out a niche for themselves and have reached the heights of success. To honour their contribution globally, India’s prominent English news channel TIMES NOW has announced the 4th Edition of ‘TIMES NOW ICICI BANK NRI OF THE YEAR AWARDS.’

Invitations for Global Indians from the field of Entrepreneurship, Philanthropy, Academics, Arts and Business Professionals to let their work catapult them to the top spot!

The awards are open to any NRI, OCI or a PIO who has stayed in USA, Canada, UK, UAE, the Middle East, Australia and New Zealand & Singapore for a stipulated amount of time and has made a mark in his/her respective field. In addition to the categories that were present in the past 3 editions, this year the “Start- up” category has been added to recognize new entrepreneeurs. The other prominent awards include India’s Global Icon and The Special Jury Award. The entire process of the awards right from the nominations to choosing the winners will have a five tier evaluation process managed by Ernst & Young. Nominations can be done on www.nrioftheyear.com

The last three editions of the awards have garnered tremendous response and have witnessed a high quality turnout. Celebrities, business professionals and entrepreneurs from all walks of life have graced the previous events. From Amitabh Bachchan winning the Global Indian Icon of the Year in the first season to Shahrukh Khan wining in the second, the event has seen many prominent faces coming together for the splendid grand finale in Mumbai.  With several new initiatives, the 4th season moves the awards a notch higher.

An extensive multi-media high impact marketing campaigns across all mediums globally over the next 100 days has begun with the theme #youdeserve.

Naveen Chandra, Head- International Business, TIMES NETWORK added “Indians globally have excelled and have made the country proud. The NRI of the year awards are India’s distinctive awards to recognize them. This year’s theme #youdeserve will build on the previous seasons and recognize the highly talented Diaspora. The new website takes the nomination process experience to a new level and we hope this will help multiply global entries for the much coveted awards. We are delighted that both our founding partners ICICI Bank and GIIS also continue to expand internationally even as our annual global Indian entrepreneur winners expand their business into India participating in the Make in India initiative, making the NRI of the year a high impact global platform with a distinct contribution to India’s GDP growth.

Speaking on the occasion, Mr. Vijay Chandok, Executive Director, ICICI Bank said, “ICICI Bank is happy to present the fourth edition of the ‘TIMES NOW ICICI Bank NRI of the Year’ awards. With each passing year, this award scales new heights which is evident from the overwhelming response that it receives every year. ICICI Bank is committed to serve Indians across the globe. These awards give us the opportunity to honour members of the NRI community who are making an impact on society and felicitate them for their outstanding achievements.”

The channel will be showcasing the steps taken to bring to light the Indian’s who have done exceedingly well internationally as well. All the episodes along with the winner profiles will be broadcasted by them globally in more than 82 countries.