Dr Rami Ranger, one of the most influential British Indians who won six Queen’s Award in business, said it is high time to set up a Sikh Regiment in Britain. “We at the British Sikh Association have been advocating for years to resurrect a Sikh regiment within the British army to keep alive the bravery of those who defended the Empire with their lives. Sadly, 84,000 Sikh soldiers sacrificed their lives and 109,000 were injured during the great wars defending King and Country which is more than any other community in comparison to its numbers…writes Dr Rami Ranger CBE

Vaisakhi marks the Birth of Khalsa which was established to uphold human freedom and above all freedom to worship freely in India. The great event of Vaisakhi in April 1699 changed the course of our destiny along with that of India and made us an economic, military and social force in the world. Vaisakhi gives us the opportunity to remind our younger generations of the supreme sacrifices paid by the Sikh Gurus and their followers to further the cause of human freedom.

It is worth remembering that it was the Sikhs who stopped the invasions into India via the Khyber Pass which went on for centuries and resulted in looting, raping and the massacre of millions of innocent Indians each year. I shudder to think how history would have turned out for mankind, without the vision and supreme sacrifices made by the 9th and 10th Sikh Gurus along with their followers. This year the Vaisakhi day falls on 14th April and it will be celebrated in Gurdwaras as well as street processions in many parts of the world.

Our Gurus realised that if people are suppressed or oppressed either by state or religion, then they cannot develop wholesomely and as a result, cannot contribute much to society and thus become low achievers.

Gurus opposed the then Mughal Emperor Aurangzeb who wanted to control people in the name of religion and to do this he attempted to convert people against their will to his blend of religion on pain of death.

The Sikhs did not rest until they brought an end to the tyrannical rule and established a secular SikhKingdom under Maharaja Ranjit Singh where everyone was equal and free to follow religions of their choice.

The Sikh Kingdom was the last in India to accede to the British Empire and the British, having been impressed by the bravery and loyalty of the Sikhs, started to recruit them into the British army in greater numbers. History bears testament to the fact that Sikhs played a crucial role alongside other Indian soldiers in both the great wars and changed the course of many battles.

Sadly, the contribution of over a million Indian soldiers in each great war is not taught in British schools and if it were, there would be a better understanding about our shared history.

I urge the Defence Secretary Sir Michael Fallon to convey our request to the Education Secretary that the contribution of Commonwealth countries in preserving our freedom is taught in schools, especially in the wake of Brexit when we will need to revisit and renew our tried and tested bond of friendship with these allies.

We at the British Sikh Association have been advocating for years to resurrect a Sikh regiment within the British army to keep alive the bravery of those who defended the Empire with their lives. Sadly, 84,000 Sikh soldiers sacrificed their lives and 109,000 were injured during the great wars defending King and Country which is more than any other community in comparison to its numbers.

The Sikhs made just 1% of the Indian population but made up over 20% to the British Armed Forces in united India. The Sikh Regiment was the most decorated regiment in the British Empire and per capita won more Victoria Crosses for bravery.

We, the British Sikh Association are passionate about helping the Armed Forces recruit more Sikhs, and the formation of the Sikh Regiment will help us in this endeavour. On our part, we pledge one million pounds for the recruitment campaign. 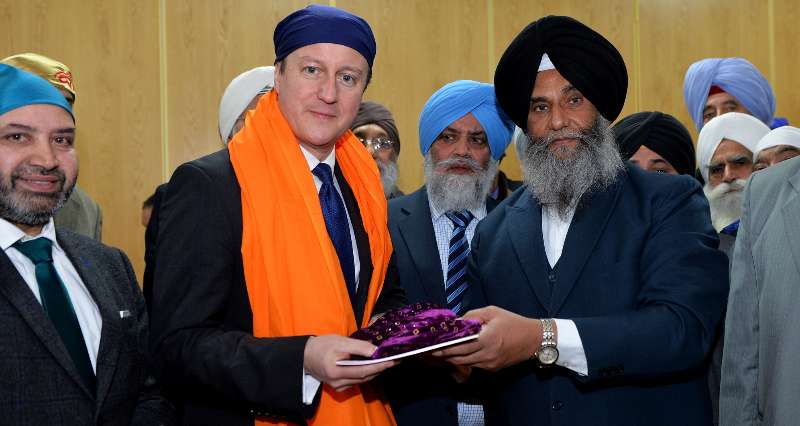 Sikhs by their very nature believe in being inclusive and never insular. Their principles of upholding justice, protecting the weak and liberating the oppressed are in themselves inspirational reasons for anyone to join the Sikh Regiment. The Regiment will not only help raise the profile of Sikhs in Britain where they are contributing a great deal but will also stop racially motivated attacks on them due to mistaken identity.

Regrettably, those who are perpetrating terror in the world also wear beards and turbans like the Sikhs. Sadly, due to the fact our schools do not teach about the Sikh contribution in the two great wars, many in Britain have no idea who the Sikhs are and why their turban is a symbol of courage, honour and integrity.

We, the British Sikh Association are passionate about helping the Armed Forces recruit more Sikhs, and the formation of the Sikh Regiment will help us in this endeavour. On our part, we pledge one million pounds for the recruitment campaign.

I will urge Virendra Sharma MP and Cllr Julien Bell, Leader of the Ealing Council to grant us the opportunity to a erect a befitting memorial in Southall to pay tribute to a community for its supreme sacrifices for our freedom.

Finally, I will urge my fellow Sikhs to only follow the teachings of our Gurus who believed in the universal brotherhood and not that of the self-proclaimed leaders who wish to separate us from our motherland, India. When the Sikh Gurus never proclaimed a country for themselves, why then, some of their followers feel the need for one. Surely, they cannot be greater visionaries than our Gurus.

The same goes for Britain where we live and where our next generation will live. We must take part in the British public and political life and encourage our children to join the British Armed forces to defend our way of life.