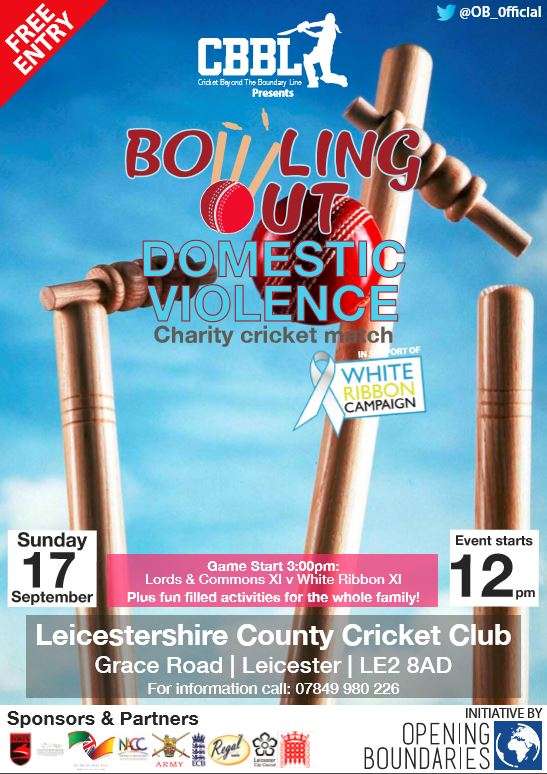 Last week, Opening Boundaries, a non-profit organisation dedicated to using sport to promote diversity and raise awareness of violence against women and girls, launched Bowling Out Domestic Violence, a national sporting initiative, in the House of Lords.

Opening Boundaries has chosen White Ribbon UK as its charity partner for all its 2017 events, both here in the UK and abroad. Under the #BowlingOutDV campaign, they will host two prestigious cricket matches at Burton Court Cricket Ground, London, and Leicester County Cricket Club (LCCC).

The launch came at an opportune moment following media coverage that suggested a cricketer who had physically abused his wife had been given a suspended sentence due to false claims that he was about to be signed by LCCC.

Wasim Khan MBE, CEO of LCCC, was appalled and publicly denounced these claims at the launch on Monday, saying, “The club is actively involved in the fight against domestic abuse”, as their commitment to this cricket match attests.

The games will be played as two T20 matches, the first taking place on Sunday 13 August, where the UKAF Ladies XI will play an Inspirational Women XI at Burton Court, and the second on Sunday 17 September, the Lords & Commons XI team will play the White Ribbon UK XI at LCCC.

These matches will showcase women in sport, whilst highlighting the importance of challenging gender-based violence through sport.

Opening Boundaries is also partnered with the British Army, Leicestershire Cricket Club, and Cricket Kenya, where they will soon be touring, taking the Bowling Out Domestic Violence campaign to a global scale.

Lord Prof. K Patel of Bradford, also a director of the England and Wales Cricket Board (ECB), chaired the event at the House of Lords on Monday and will captain the Lords & Commons team at LCCC in September.

Lord Patel says, “I am delighted to have hosted Opening Boundaries at the House of Lords this week.

“It is great to see a community organisation founded in my home town making a global impact through the medium of sport, particularly cricket.

“I encourage everyone to get behind this great initiative to address gender inequalities, and help us raise the profile of the vital work of the White Ribbon Campaign globally.”

Managing Director and Co-founder of Opening Boundaries, Halima Khan, is a Bradford-based sportswoman and cricket coach.

She states, “I am honoured that Lord Patel provided such a prestigious platform to raise awareness about these important issues. Women only make up 7% of all sports media coverage in the UK. I want initiatives like Bowling Out Domestic Violence to raise awareness about violence against women, and to challenge this negative sporting media bias. We also need our male counterparts to stand up and support us in bridging gender inequalities.

“We are delighted to be partnering with White Ribbon UK, as well as the Armed Forces, LCCC and Cricket Kenya, where we will also be delivering our campaign later this year.”

White Ribbon UK is part of a global movement that engages men to take a stand to end male violence against women, challenge negative gender stereotypes and promote healthy approaches to masculinity.

The charity currently has over 300 White Ribbon Ambassadors, and over 70 accredited public service organisations.

David Bartlett, White Ribbon UK CEO says, “White Ribbon UK is all about working in partnership with other fantastic organisations like Opening Boundaries to tackle gender-based violence and negative gender stereotypes collaboratively. These prestigious matches will make a powerful statement that we, as a community and nation, will not tolerate violence against women and girls.”