The first migrant Pakistani and Indian women revived memories of their homeland through ancient songs and recipes handed down from mother to daughter.

When women migrated 4,000 miles from Pakistan and India to the North of England – often to join husbands already working in the UK – their ancient songs and recipes came with them, providing a link with their homelands that has lasted to this day.

Now, a University of Huddersfield-based researcher’s new book explores their significance and she shows the crucial role of females and their culinary expertise in keeping traditional cultures alive in a new and distant country.

In addition to being an academic text, Dr Razia Parveen’s book also serves as a unique cookbook, because it has an appendix of 21 recipes that enable ambitious cooks to prepare deeply authentic South Asian dishes.  They include a deceptively simple recipe for curry (see below) – but Dr Parveen warns that it bears little resemblance to the version that has virtually become the UK’s national dish.

“I think that was invented by chefs in Birmingham!” she says.

The book is titled Recipes and Songs and is based on Dr Parveen’s PhD thesis at the University of Huddersfield, which she completed in 2014.  She carried out research among Asian women in the Lockwood district of Huddersfield, where she herself was born and raised.

Using the techniques of oral history, she recorded Punjabi and Kashmiri folk tales from first, second and third generation immigrant women, but gradually her focus shifted to the traditional songs sung on the eve of weddings – texts and translations of these are also provided in the book – and on the recipes passed down from mothers to daughters.

“The women that came to Lockwood after marriage had little in the way of possessions and brought only their memories and their culinary knowledge with them,” writes Dr Parveen. 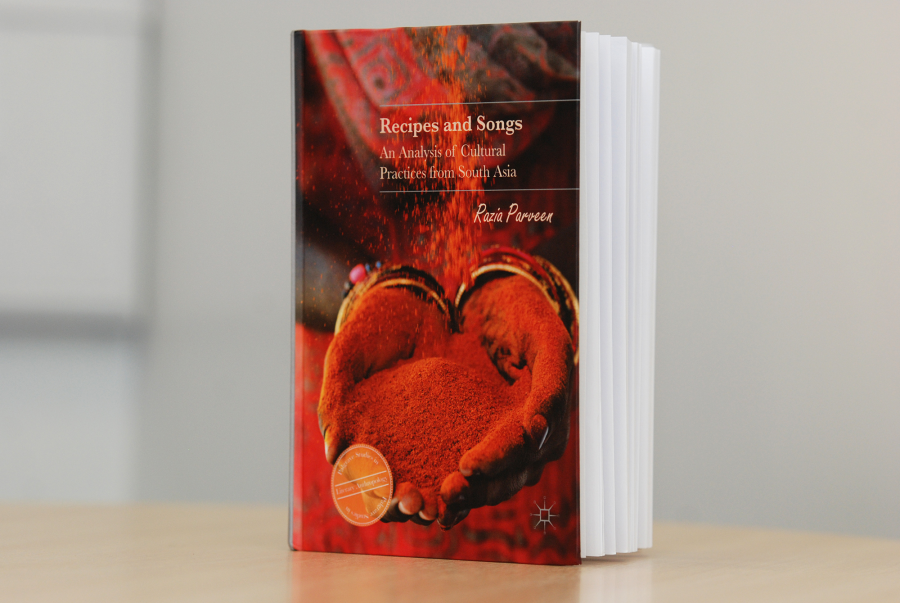 Her argument in the book is that “the cultural practices that migrated with the South Asian women must be understood as literature and they have too long been neglected as such and are consequently poorly understood in terms of their contribution to the diasporic communal identity”.

Dr Parveen describes the circles of friendship formed by the women: “They found solace and comfort in the language and cultural habits they had in common.  This formed a communal bond between the women that extended throughout the rest of the community.”

The book also furnishes social history, including the immigrant experience in Lockwood and the wider UK, and describes some of the challenges to traditional cultures.  These include the influence of Bollywood songs, resisted by some older members of the Asian community but attractive to younger people, because of their glamour, glitz and escapism – a contrast to the older songs, which reflected the reality of life.

After her schooling at Moor End Academy, Dr Parveen – whose book includes descriptions of her immigrant mother’s experiences in the UK – studied for a first degree in English language and literature.  A PhD scholarship then brought her to the University of Huddersfield, where she is currently an affiliate, working on a new book of short stories inspired by her research into traditional cultures.

Recipes and Songs: An Analysis of Cultural Practices from South Asia, by Dr Razia Parveen, is published by Palgrave Macmillan as part of its Studies in Literary Anthropology series.