Following the market open ceremony, Nikhil Rathi, CEO, London Stock Exchange Plc hosted a round table event with Minister Jaitley, delegates from the Federation of Indian Chambers of Commerce & Industry, Fintech companies and leading investors to discuss London’s significant role as a partner to India, supporting the country to develop its FinTech ecosystem and deliver key Indian priorities like infrastructure development, sustainable energy investment and the growth of smart cities.

“Minister Jaitley’s second visit to the UK in a year underlines the success of the business and financial partnership between the UK and India and builds on recent landmark visits by Prime Minister Theresa May to India and Prime Minister Modi to the UK. We’re honoured once again to welcome Minister Jaitley to open trading on our historic markets. 2016 was a tremendous year for Masala bonds in London, with the Indian corporate Masala bond market launching in London with HDFC’s landmark bond issuance in July 2016, cementing London Stock Exchange’s clear position as the leading global venue for offshore Rupee denominated fundraising.

“India’s growth trajectory is truly remarkable, with the highest growth rate among the G20 economies and the Minister’s Union Budget announced earlier this month will only spur this on. With the depth, liquidity, multi currency and profile of London’s markets, together with the UK remaining the largest G20 investor in India, London Stock Exchange is ideally suited to partner with India in this extraordinary growth story to deliver key Indian priorities like infrastructure development, sustainable energy investment and the growth of smart cities.” 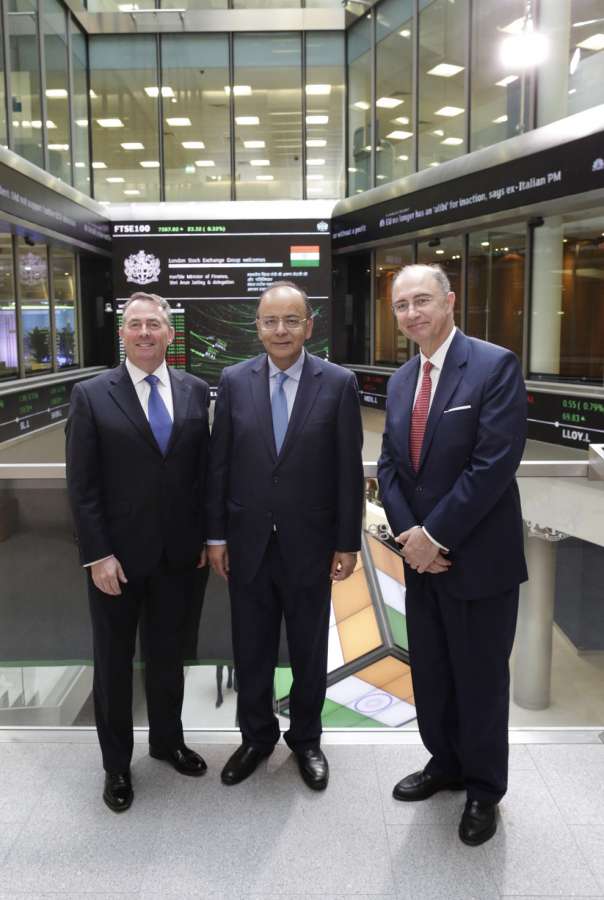 “The UK-India investment relationship is hugely important. India is now the third largest investor and second largest job creator in the UK; the UK is the largest G20 investor in India and plays an important role in building skills in the Indian workforce.

“The UK Government is committed to deepening this relationship further and in my first months as Secretary of State for International Trade, I’ve been lucky enough to visit India twice – most recently accompanying the Prime Minister on her first bilateral visit outside Europe, as well as her first trade delegation.

“In the words of Prime Minister Modi, India and the UK are an ‘unbeatable partnership’.  And I’m very glad that our Prime Ministers recently committed to ‘building the closest possible commercial and economic relationship’.”