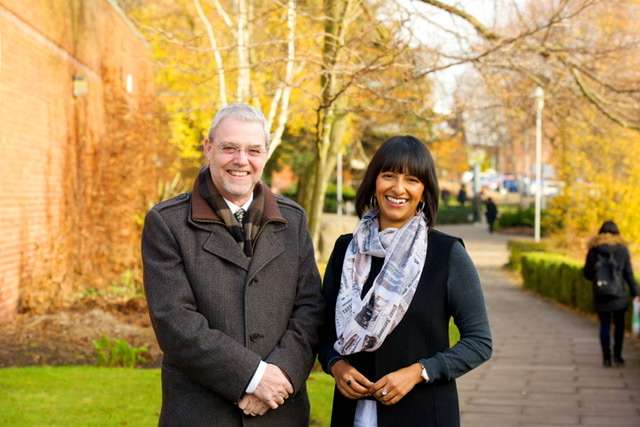 The nationally acclaimed broadcaster Ranvir Singh will be inaugurated as the new Chancellor of the University of Central Lancashire (UCLan) at a special ceremony to be held at Preston Guild Hall on Friday, 20 January.

Ranvir will become the University’s third Chancellor, taking the helm from Sir Richard Evans who was inaugurated in 2001. The ceremony also marks the inauguration of Professor Mike Thomas as the University’s fourth Vice-Chancellor.

Ranvir was brought up in Preston, completing a Postgraduate Diploma in Broadcast Journalism at UCLan in 2000. She is now known to millions as a presenter on Good Morning Britain, ITV Evening News and News at Ten, and the Tonight programme.  She also has her own primetime series for ITV, Real Stories with Ranvir Singh. In 2013 she received a UCLan Honorary Fellowship for her contribution to broadcasting. In 2015 she was Asian Media Personality of the Year.

For Professor Mike Thomas the ceremony symbolises the completion of his first year as UCLan’s Vice-Chancellor.  It was a year in which he oversaw the University’s move into the top 3.7% of all worldwide universities and further established Central Lancashire’s position as an anchor institution within the local community, helping support the development of Preston as a whole.

Commenting on the appointments David Taylor, Pro-Chancellor and Chair of the University Board, said: “Both Ranvir and Mike bring inspiration and vision at a time of increased competition and change within the higher education sector.

“Ranvir continues to make a huge success of her career in broadcasting and journalism. Importantly she has an affinity with Preston and the University and is someone who cares about our heritage and our future. She is a wonderful communicator with the capacity to inspire and I know she will be a fantastic role model for our students.

Commenting on her new UCLan role, Ranvir said: “I am immensely proud to accept the University’s offer of becoming its new Chancellor. I’m Preston born and bred, I studied for my postgraduate degree in journalism here and the experience helped to shape me and my career. In fact, had this ceremony been on any other day I’d have been covering Donald Trump’s inauguration in Washington!

“I am truly honoured to be given this opportunity of helping inspire the next generation of talent coming through. The University has an exciting future and I can’t wait to be part of it.”

Vice-Chancellor Professor Mike Thomas added: “This inauguration ceremony is a rare but important civic event. It provides us with an opportunity to not only celebrate our educational roots but also enables us to highlight our future direction.  In the coming years we will continue to develop our role as a civic University, supporting Preston and our county as well as delivering benefits to individuals, organisations and the community as a whole. For these reasons I am delighted to lead the University into the next stage of its development and success.”