No one ever talks about partition. 70 years still feels too soon to ask detailed questions from those we love, asking them to open up painful memories and losses and perhaps some of us don’t feel brave enough to listen to the pain of our most revered. 70 years means that for so many, either the opportunity has passed or is slipping away slowly. 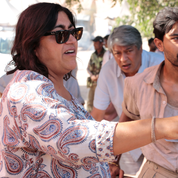 The other eye, intently looking, naively, for my family in the crowds of displaced people, to see them, to tell them, we, your children and grandchildren, watching, want to tell you how this all plays out; there is hope, there is kindness, love and happiness. You will survive the despair and destruction. Would you believe that the British have left India, but your next generations of Indians will be British.

For those who wish to see blame, destruction, heartbreak and horror played out, we have the eyes of tens of millions of people to look into. Those who lost their homes, their loved ones, their lives as they knew them and those who gained their homeland but also at great cost. Viceroy’s House may start us thinking about how brave we are to ask and listen to those real stories.

I miss my paternal grandmother often. If she were here, honestly, I don’t know if I would have the strength to hear her words. My paternal uncle’s words still stuck in my head, with the power to bring me to tears in an instant.

My maternal grandparents, they say that they have seen the real thing, the pain was devastating then and for now it may be too much to watch and relive the experience.

History has many lessons to teach us, the most important of which is, we must learn from history.

Viceroy’s House tells the true story of the final five months of British rule in India and coincides with the 70th anniversary of the Independence of India and the founding of Pakistan. The film stars Hugh Bonneville as Lord Mountbatten, Gillian Anderson as his wife, Lady Mountbatten, Manish Dayal and Huma Qureshi as their staff, and the late Om Puri.