British Prime Minister Theresa May appeared in full swing on the penultimate day of UK election campaign as she announced a slew of proposals to tackle terrorism during her election rally in Slough….reports Asian Lite News

Prime Minister also dropped a hint at changing human laws if required to curb the menace of extremists in the country.

May outlined her proposals at an election rally in Slough on what was the penultimate day of canvassing in the British general election campaign.

With Britain still reeling from two attacks in London and one in Manchester, May seemed determined to show voters she will respond to the terror threat if she wins the election Thursday, Xinhua reported.

May said she would look at making it easier for Britain to deport foreign terror suspects.

But controversially, she also outlined increased controls on extremists who the security services think may present a threat to public safety, but where there is not enough evidence to prosecute them.

Following the London Bridge attack on Saturday, May said she aimed to get tough on terror with her “enough is enough” speech.

In Slough Tuesday she said her plans would mean longer prison sentences for people convicted of terrorist offences, and making it easier for the authorities to deport foreign terror suspects to their own countries. 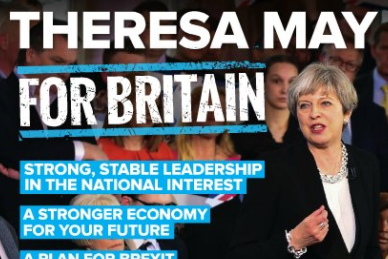 May added: “And I mean doing more to restrict the freedom and the movements of terrorist suspects when we have enough evidence to know they present a threat, but not enough evidence to prosecute them in full in court. And if human rights laws stop us from doing it, we will change those laws so we can do it.”

The Guardian newspaper commented Tuesday night that May’s proposed measures appear to be an attempt at strengthening terrorism prevention and investigation measures rather than a complete return to control orders introduced by the last Labour government which were repeatedly struck down by judges in the British courts.

The Guardian said May’s measures could involve further curfews, restrictions on association with other known extremists, controls on where they can travel and limits on access to communication devices.

Political commentators also said Tuesday that although May’s Conservative Party says it will not to withdraw from the European Convention on Human Rights (ECHR), the party, if re-elected, could begin to try to replace or amend parts of the ECHR after Britain leaves the European Union.

May’s proposals, said the Guardian, follow criticism from Labour and other parties about her cuts to policing and approach to tackling terrorism in the Home Office, which she led for six years before becoming prime minister last year.

Labour leader Jeremy Corbyn has accused May of cutting police numbers by 20,000 officers, while London’s Labour mayor Sadiq Khan warned the Metropolitan Police has made as many cuts as it can, adding he’s worried about the impact of further planned savings in the capital’s police budget by the government.

Speaking in London, Khan said over the last seven years the Met had lost 600 million pounds ($775 million) through Conservative government cuts, with a further 400 million pounds ($517 million) in planned cuts to the Met budget. Khan claimed proposed changes to the police funding formula would take the total cuts to 1.7 billion bounds ($2.2 billion).

“All there is left to cut is the bone,” said Khan.

Corbyn, addressing a packed rally in Birmingham defended Labour’s election manifesto saying: “It’s not a wish-list, it’s a program and we are going to carry it out. I’m determined that every youngster should get a chance to go to university so we will end student fees.”