A group of Muslim women stood on Westminster Bridge in a show of solidarity with victims of last week’s terror attack outside the British Parliament that killed four people….reports Asian Lite News 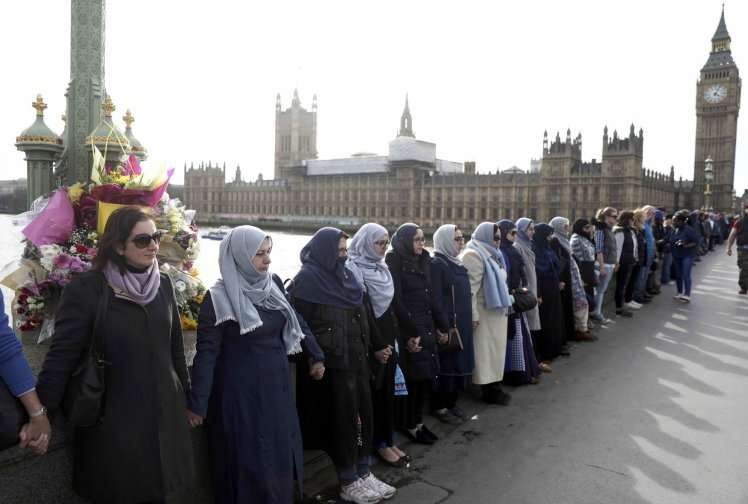 A group of Muslim women stood on Westminster Bridge in a show of solidarity with victims of terror attack outside the British Parliament that killed four peopleThe group, who said they were wearing blue as a symbol of hope, stood holding hands for five minutes on the Westminster Bridge as the Big Ben struck 4 p.m. on Sunday, The Telegraph reported.

People from a range of backgrounds joined the event, organised by Women’s March On London.

Three civilians were killed and many more were injured after a lone attacker, Khalid Masood, sped along the bridge before storming the parliamentary estate and stabbing to death a police officer on March 22.

Masood was shot dead by police.

“The feeling of what happened here on Wednesday was really strong,” Fariha Khan from Surbiton said.

“We thought of the ordinary people who were here and were mowed down, standing here like this, it was very overwhelming.”

She said the women wanted to add to the condemnation of the violent attack and stand defiant in the face of terrorism.

“When an attack happens in London, it is an attack on me,” The Telegraph quoted Sarah Waseem from Surrey as saying.

So far, 12 people have been arrested in relation to the attack, CNN reported.

The latest was a 30-year-old man who was detained on Sunday in Birmingham “on suspicion of preparation of terrorist acts” , the Metropolitan Police said.