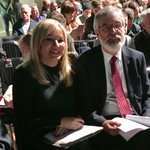 The British government rejected on Sunday a claim by Gerry Adams, President of the Sinn Fein political party, that taking Northern Ireland out of the EU will destroy the agreement that restored peace to the island.

Adams made his remarks during a speech on Saturday in Dublin, Xinhua news agency reported.

The statement was issued in London following Adams’ comments, suggesting Britain leaving the European Union will destroy the Belfast Agreement.

An official spokesman for the British government said Adams’ comments are totally without any basis in fact.

“None of the institutions and provisions set out in the Belfast Agreement … are in any way undermined by the decision of the United Kingdom to leave the EU,” said the spokesman.

Britain is “fully behind the implementation of the Belfast Agreement and its successors,” he said.

In his speech earlier, Adams said Northern Ireland should enjoy special status after Brexit, claiming it would not affect the constitutional settlement which secures its status as part of Britain.

He told his audience at a conference on achieving a united Ireland: “The British government’s intention to take the north out of the EU, despite the wish of the people there to remain, is a hostile action.

Adams is regarded as one of the most important people to be part of the peace process in Northern Ireland.

Britain’s departure from the 28-nation trading bloc will mean the Northern Ireland border with the Irish republic being the only EU border within Britain.

In a treaty going back to the 1920s people from both sides of the border have had free passage between each other.

Ireland joined the EU at the same time as Britain, meaning there was no change in the border arrangements.

Earlier this week, the Irish Prime Minister Enda Kenny reiterated his wish for “a preservation of the seamless border that is there now”.