The Chemical Weapons Convention is 20 years old, having come into force on 29 April 1997. It outlaws the production, stockpiling and use of chemical weapons. Since 2005, the United Nations has set aside this day as its day of remembrance to provide an opportunity for people around the world to pay tribute to the victims of chemical warfare…A special article by Gareth Bayley, UK Special Representative for Syria 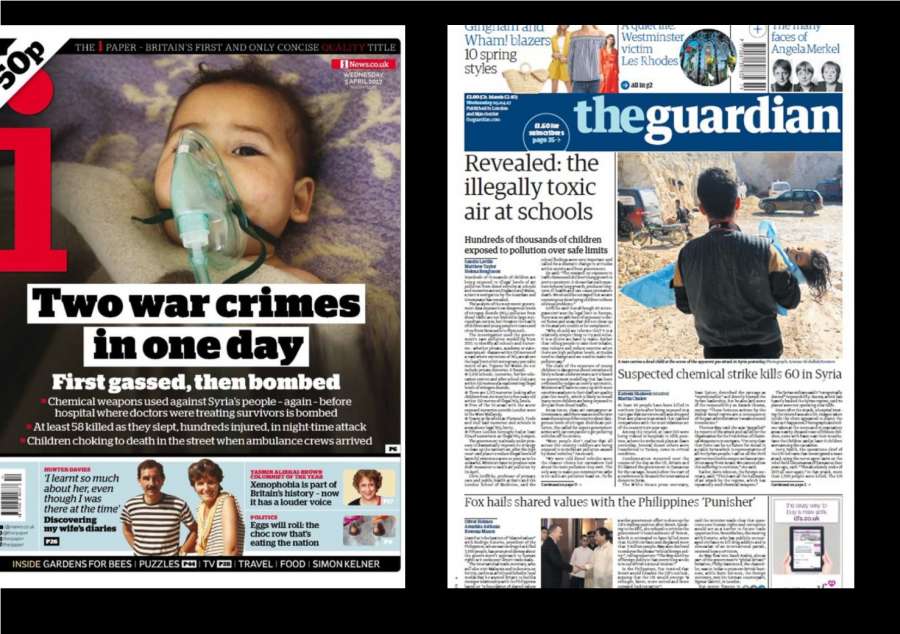 The international community must stand united to condemn the use of chemical weapons
Every year the global community pauses on 29 April to remember victims of chemical warfare. The UN promotes international awareness and action against these horrific weapons that strike insidiously and indiscriminately, causing agonising death and injury to people who have no way to protect themselves.

This year will be all the more poignant as the images of the shocking chemical attack in Khan Sheikhoun in Syria still resonate. Sadly we have been here before and these attacks only highlight the suffering the people of Syria have had to endure for far too long.

The Chemical Weapons Convention is 20 years old, having come into force on 29 April 1997. It outlaws the production, stockpiling and use of chemical weapons. Since 2005, the United Nations has set aside this day as its day of remembrance to provide an opportunity for people around the world to pay tribute to the victims of chemical warfare, and express support for the Organisation for the Prohibition of Chemical Weapons (OPCW). It is also a chance for the world to stand united to condemn the use of chemical weapons, anytime, anywhere and by anyone.

The OPCW are rightly in the process of undertaking an independent inquiry into the events in Khan Sheikhoun. The Director General has already reported that results of their initial analysis indicate exposure to sarin or a sarin-like substance.

This is consistent with France’s assessment published on 26 April as well as our own assessment by UK scientists of samples from the victims and the immediate environment. In fact the US, the UK, France and Turkey have all independently tested their own samples and have concluded that sarin was used.

As British Foreign Secretary Boris Johnson has said, “we know from shell fragments in the crater that sarin had not only been used, but that it was sarin carrying the specific chemical signature of sarin used by the Assad regime. Given that samples from the victims show conclusively that they had been exposed to sarin gas, there is only one conclusion to be reached: that the Assad regime almost certainly gassed its own people, in breach of international law and the rules of war”.

The people of Syria should be protected by their government; their children should be growing up safe and healthy. Instead they are the innocent victims in a conflict that has brought untold suffering, death and displacement.

We are clear that a political solution – rather than a military one – is needed to stop the war. The UK remains focussed on building support for the UN-led political process and transition to a different kind of government for the Syrian people which will bring lasting peace and stability. We are in the meantime working to help alleviate the suffering of the Syrian people. Since 2012 the UK has committed £2.46 billion, our largest ever response to a humanitarian crisis, and making us the second largest bilateral humanitarian donor to the Syria crisis.

So, on the UN’s ‘Day of Remembrance for all Victims of Chemical Warfare’ let us remember the people of Khan Sheikhoun alongside all the innocent men, women and children who have died in six years of awful conflict in Syria. The international community must make clear that any use of chemical weapons is unacceptable. Only by joining together to ensure that those responsible face consequences for their actions can the global community prevent this sort of atrocity happening again.