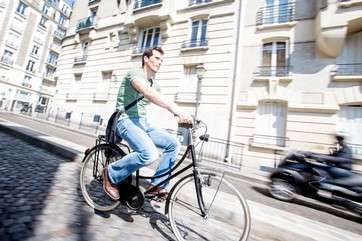 The protest was organised by the campaign group ‘Stop Killing Cyclists’ a week after three cyclists were killed in traffic accidents, Xinhua news agency reported.

At one stage, the protesters lay down outside the main government buildings in Whitehall, pretending to be dead in a minute long silent protest.

Organisers said the vigil was a way of paying tribute to those killed in one of the bloodiest weeks on London’s roads.

Making their way from Trafalgar Square along Whitehall, many cycling protesters rang their bells in a noisy chorus to draw attention to their fears.

In a speech to the crowd, campaigner Nicole Branch, referring to the three cyclists and two pedestrians who died in accidents in the past week, said: “Five sets of families and friends are grieving and these deaths could have been avoided if this government would just invest in infrastructure.”

The campaign group called on Chancellor of the Exchequer Philip Hammond to increase investment in Britain’s cycling and pedestrian infrastructure by allocating 10 per cent of the transport budget to making travel safer for cyclists and walkers.

On his part, London mayor Sadiq Khan said: “I’m determined to make cycling safer and easier for all Londoners. That’s why we’re addressing the most dangerous junctions, increasing the number of safer cycle lanes, working with boroughs to introduce more 20 mph limits (32 km/h) and removing the most dangerous lorries from our streets.”

“I’ve allocated more investment for cycling than ever before and appointed the capital’s first ever full-time Walking and Cycling Commissioner to drive forward these improvements.”

A spokesman for the government’s Department for Transport said: “Britain has some of the safest roads in the world but we are committed to reducing the number of cyclists killed and seriously injured.”

Meanwhile, many of the protesters wore facemasks to highlight the growing problem of air pollution in London.

Protesters waved banners with the messages “Traffic stop killing with pollution” and “We are all canaries in London’s toxic air.”

Earlier, Khan had issued a warning of a high pollution forecast on Saturday for London, with warnings being posted at bus stops, underground stations and roadsides.