Looking to expand its reach in the Arctic region, increase the transportation of cargo and conduct year-round navigation in the ice-covered polar waters, Russia is set to commission the 33,000 tonne Arktika, the world’s largest nuclear-powered ice-breaker, in 2019….writes Anjali Ojha 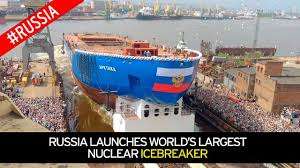 Not only that, Vyacheslav V. Ruksha, Director General of Atomflot that maintains Russia’s fleet of nuclear icebreakers, said in an email interview that Leader, thrice the size of Arktika and which looks like something straight out of a science fiction movie, is also progressing well.

Arktika, the lead ship of its class, has a length of 173 metres, almost the size of two football fields, and a width of 34 metres and in ice as thick as three metres at up to 2 nautical miles per hour.

“The Arktika will be the flagship in the Russian nuclear icebreaker fleet. The ship will be equipped with a RITM-200 nuclear propulsion plant, which comprises two reactors of 175 MW each,” Ruksha said.

“The nuclear plant on the ship consumes only a few tonnes of nuclear fuel a day. In comparison, a piston engined sip would require tens of tonnes of oil for that task. That is why diesel-powered icebreakers are essentially unable to ensure year-round navigation in the Arctic region,” he said.

The ship was launched in June 2016 and is at present being fitted out. The nuclear power unit was assembled in September 2016 and two reactors were installed.

“Each of them weighs 180 tonnes, and their installation took about a month and was carried out by a gigantic floating crane,” Ruksha said.

The Arktika will have a 53-member crew, which is already involved in its construction to closely understand all the details of the gigantic vessel.

The main task of the icebreaker will be to clear a passage for groups of vessels in the Arctic region.

“The icebreaker also could be used to tow vessels and other floating structures in ice-covered areas, provide assistance to ships and for rescue operations in icy conditions,” he said.

The Atomfloat director general said the size of the Russian fleet of nuclear icerbreakers was just “optimum” to ensure regular shipping traffic in the waters of the Northern Sea Route, which goes along the northern shores of Russia and in the Arctic Ocean and ends at Cape Dezhnev.

“In the coming decades, our main task will be to provide icebreaker support for the national hydrocarbon projects with direct transportation to Pacific Ocean markets,” he said.

In 2016, the cargo transportation capacity along the Northern Sea Route amounted to be around 6.5 million tonnes a year.

However, according to forecast, a quantitative and qualitative leap is by 2022.

“It may reach up to 30 million tonnes per annum. To make this cargo traffic possible, Russia is building the world’s largest nuclear-powered icebreakers,” Ruksha added.

Shipping routes closer to the north pole can significantly reduce distances and ease ocean route trade. For instancce, a voyage from Shanghai to Hamburg via the Northern Sea Route reduces the distance by roughly 30 percent compared to one via the Suez Canal.