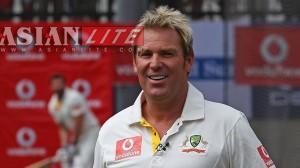 Angry Shane Warne took a dig at media for blowing out of proportion his comments about being approached for the role of India coach.

Warne was quoted by a section of media as saying he was “too expensive” for the Board of Control of Cricket in India (BCCI) to afford.

“I am very expensive, I don’t think they can afford me,” Warne was quoted as saying by a leading newspaper. “Virat Kohli and me can have a good partnership, but as I said, I am very, very expensive.”

Lashing out at such remarks, Warne tweeted: “Indian coaching position. I was in a lift & was asked if I would put my hat in the ring I said: “India can’t afford me” tongue in cheek!”

Warne also denied he had said anything about his partnership with India captain Virat Kohli.

“@imVkohli & I would work well together as a quote, this is totally made up. I never said that to anyone, very disappointing journalism,” the 47-year-old further added.

Current India coach Anil Kumble’s contract expires at the end of this month, and the BCCI advertised the post ahead of the ongoing ICC Champions Trophy.

Virender Sehwag, Tom Moody, Craig McDermott, Richard Pybus, Lalchand Rajput, and Dodda Ganesh are in line for the job along with Kumble who re-applied.