A student from Birmingham Conservatoire (UK) is mixing his love of both music and athletics to attempt a Guinness World Record; running the fastest half marathon dressed as a musical instrument….reports Asian Lite News

Donning a custom-made viola costume, Alistair Rutherford will be running the Liverpool Half Marathon on Sunday 2 April.

The current record was set by Rakshith Shetty in Karnataka, India on 5 December 2015. The Indian runner ran the SBI Bengaluru Midnight Marathon while dressed as a guitar.

Created by Merseyside-based designer Brian D Hanlon, Alistair’s outfit is made from lightweight Plastazote foam and comes complete with a striking headpiece that mimics the shape of the viola’s neck and pegbox.

Alistair hopes to raise funds for the collaborative UK-South African project, Cape Gate MIAGI Centre for Music & BirminghamConservatoire – or ARCO, which is also the name for the technique of playing a stringed instrument with a bow.

ARCO has seen 24 strings students aged between eight and 16 in South Africa selected to participate in weekly instrumental Skype lessons, given by academics, current students and alumni of Birmingham Conservatoire, part of Birmingham City University.

ARCO aims to provide the benefits and life changing inspiration of music to children in the most deprived of circumstances. As well as providing transformative music education activities, Conservatoire staff and students – including Alistair – have been acting as role models for vulnerable youngsters living in Soweto, a Johannesburg township deeply affected by poverty and crime.

Running the Liverpool Half Marathon is just one of several fundraising events Alistair has organised in aid of ARCO. Last year, the violist ran the equivalent distance of the length of South Africa’s coastline, clocking up 1,739 miles (2798 kilometres) by the time he flew out to Johannesburg for the first ARCO Festival. Meanwhile, last month, he organised an evening of chamber music at Birmingham’s Ikon Gallery. 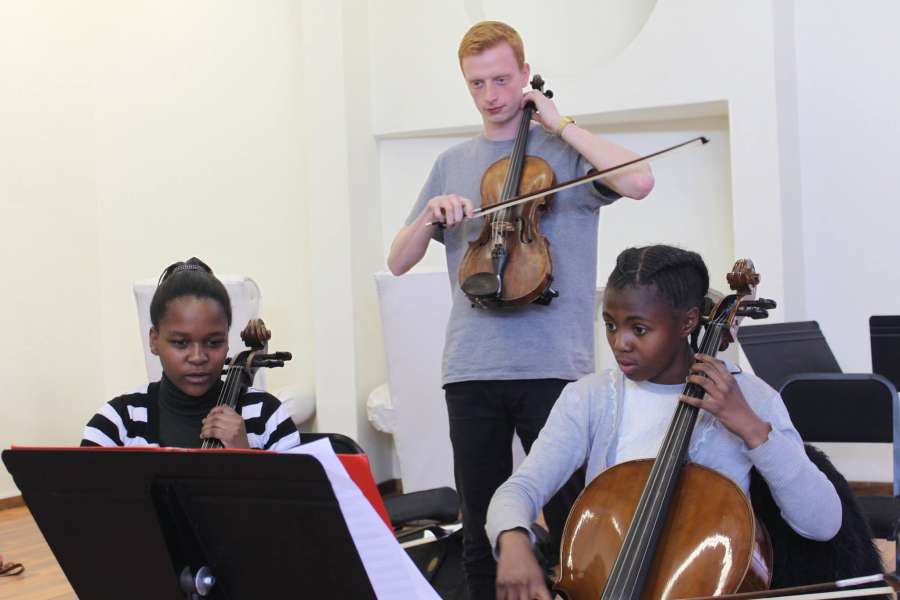 21-year-old Alistair, who was hails from Allerton in Liverpool, said:

“After running the distance of the South African coastline during my third year of study at Birmingham Conservatoire, and previously running a marathon when I was 17, I was struggling for fundraising ideas. One evening whilst in our local pub myself and fellow ARCO teacher Matt Johnstone joked about a Guinness World Record involving both the things I love; running and the viola.

“12 weeks later my application was accepted by Guinness World Records to attempt the record for the fastest half marathon dressed as a musical instrument at the Liverpool Half Marathon!

“Training has been going well and I am aiming to beat the record that currently stands at one hour, 26 minutes and 57 seconds”.

Louise Lansdown, Head of Strings at Birmingham Conservatoire, initiated the ARCO project in 2015. She said:

“Birmingham Conservatoire is full of admiration for Alistair’s adventurous and rather ‘off centre’ project. We are currently enjoying daily updates, including photos and videos of Alistair’s training sessions with his brand new enlarged viola! Alistair and his viola can be seen running around Edgbaston Reservoir most mornings around 7am – a sight not to be missed.

“Alistair’s inspired fundraising venture and unswerving commitment to the ARCO Project is quite incredible, and all funds raised from Alistair’s remarkable efforts will be going towards chamber music teaching, ear training, instrument transportation and supporting live streaming of events from Birmingham to Soweto! Any funds raised will be directly impacting  the musical lives of 24 wonderfully talented young string players on the ARCO Project.”

In fact, Louise will be running a festival in Soweto as part of the ARCO Project at the same time Alistair endures his half marathon. Still wanting to support Alistair’s efforts, his journey will be streamed live to the ARCO youngsters, so they  can cheer him on from the other side of the world.

In order to make this happen, Alistair’s childhood friend James Sharples will be cycling the route alongside him and broadcasting the race over Facebook Live. Also on bicycles will be Alistair’s father, Ken, who will be taking photographs and filmmaker Andrew Peat, who will be capturing the action for a documentary about the world record attempt.

Alistair will be further supported by his athletics club, Birmingham-based Birchfield Harriers. One of the most successful athletics clubs in Britain – having being represented at every single Olympic Games bar one since 1908 – they became the first club in history to win both the men’s and women’s Premier League titles last year. Alistair is trained by Senior Men’s Distance Coach, Dave Lawrence.

Alistair began running in Liverpool in 2013, when he joined Mossley Hill Athletic Club.

You can support Alistair’s world record attempt via his JustGiving page. you can watch his progress in the Liverpool Half Marathon can be watched on Facebook Live from 9am on Sunday 2 April.