So many of the contemporary filmmakers seem to have lost the plot. Imtiaz Ali, the supremo among avant garde directors, is struggling to make himself coherent to an audience that just doesn’t care what happened when “Harry Met Sejal”…reports Asian Lite News 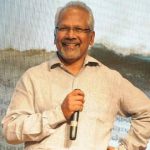 Vishal Bhardwaj’s last three films “Matru Ki Bijlee Ka Mandola”, “Rangoon” and the recent “Patakha” have ranged from the strange to the ugh.

As for Anurag Kashyap, when did any of his films make money?

The heartening news is that another pioneer of new-age Indian cinema, Mani Ratnam, has regained his mojo somewhat. His new film “Chekka Chivantha Vaanam” (CCV), meaning Crimson Red Sky, is most decidedly not among Mani’s best works. But it is markedly superior to his other recent films, the vapid “O Kadhal Kanmani” and the weird “Kaatru Veliyedai”. As for his last Hindi film “Raavan”, it was lost in translation.

Luckily, gangsterism sits well on the post-60 phase of Ratnam’s life and career. CCV is a virile and rugged he-man kind of film. It looks at the sprawling family life of a gangster Senapati (the ever-credible Prakash Raj) from the viewpoint of his violent job-profile. It’s like Sooraj Barjatya meets Francis Ford Coppola. And they both decide to share a sumptuous lunch of dosa, sambhar, idli and rasam.

Go ahead and say, “Burp”. CCV is a work of excessive self indulgence. Ratnam goes for the (over)kill. There are long shootouts on the streets of Chennai and in brothels and other claustropobic settings which give away nothing of Ratnam’s earlier brilliance in portraying the wages of gangsterism in “Dalapathi” or “Nayakan”.

Not one moment in CCV is dedicated to romancing brilliance. Rather, I feel Ratnam made this film to regain lost boxoffice ground, the way Raj Kapoor made “Bobby” after the failure of “Mera Naam Joker”. Or Guru Dutt made the kitschy “Chaudhvin Ka Chand” after the classic “Kaagaz Ke Phool”. Sometimes a filmmaker has gotta do what he’s gotta do.

Except this: Ratnam’s last film was no “Mera Naam Joker” or “Kaagaz Ke Phool” but a horribly botched-up love story where the talented Karthi didn’t know how to approach his character’s reckless passion. He plunged in and never came up for breath.

Reckless passion runs through CCV. Here it is passion for power. Senapati’s three sons, played with varying degrees of excellence/non-excellence by Arvind Swamy, Arun Vijay and Silambarasan, look and behave like leftovers from a Shakespearean tragedy that the bard would rather not think about.

Betrayed by their own ambitions, Mani’s heroes behave as if they own the city of Chennai. The swagger is tragically misplaced in the context of the decadence that grips the city.

The acting is uneven. With some actors rising to the occasion. Others just not caring because there are so many characters being accommodated into the tank of treachery, that the whole framework threatens to sink in the abyss of blood and butchery. Not that the shoot-outs are particularly impressive. But this time doing an action film Mani Ratnam has not shot himself in his foot the way he did in “Raavan”.

There is a desperate velocity to the violence in CCV. But he creates and carves out women characters as full-bodied, and not only in their physicality. Here there are two major female characters. Chennai’s Brando, Senapathi’s wife played by Jaya Sudha, who’s the backbone of the family. The other more powerful female character is the eldest scion Nawab (Arvind Swamy’s) wife Chithra played with tender firmness by Jyothika.

Arvind Swamy’s mistress is played by Aditi Rao Hydari who seems happy being a nonentity in a Mani Ratnam film. Now I know what Shabana Azmi meant when she said she would happily take a broom and sweep from one corner of a frame to the other in a Satyajit Ray film.

Death stalks “Chekka Chivantha Vaanam”, luckily not the distributors. This time Mani’s film has made lots of money. Hopefully, his next one won’t only be a profit earner, it would also remind us of the director’s brilliance in “Nayakan”, the underrated “Yuva” and “Alai Payuthe”.