North Korean leader Kim Jong-un has reaffirmed his willingness to denuclearize the Korean Peninsula and hold a summit with US President Donald Trump, South Korean President Moon Jae-in said on Sunday. Trump also has revived hopes for the summit by announcing that the date, location for the summit hasn’t changed….reports Asian Lite News

“Chairman Kim Jong-un has once again clearly expressed his commitment to the complete denuclearization of the Korean Peninsula following his pledge in the Panmunjom Declaration and expressed his willingness to end the history of war and confrontation through the success of the North Korea-US summit,” Moon said of his latest summit with the North Korean leader held on Saturday.

“We both agreed the June 12 North Korea-US summit must be successfully held,” Yonhap News Agency quoted Moon as saying here.

Saturday’s inter-Korean summit was held on the North Korean side of Panmunjom, a border village that sits directly on the Military Demarcation Line that divides the two Koreas.

The first Moon-Kim summit was held on the South Korean side of Panmunjom on April 27.

Trump on Thursday called off his scheduled summit with Kim, citing the North’s tremendous anger and open hostility, only to suggest later the meeting would go ahead as planned. 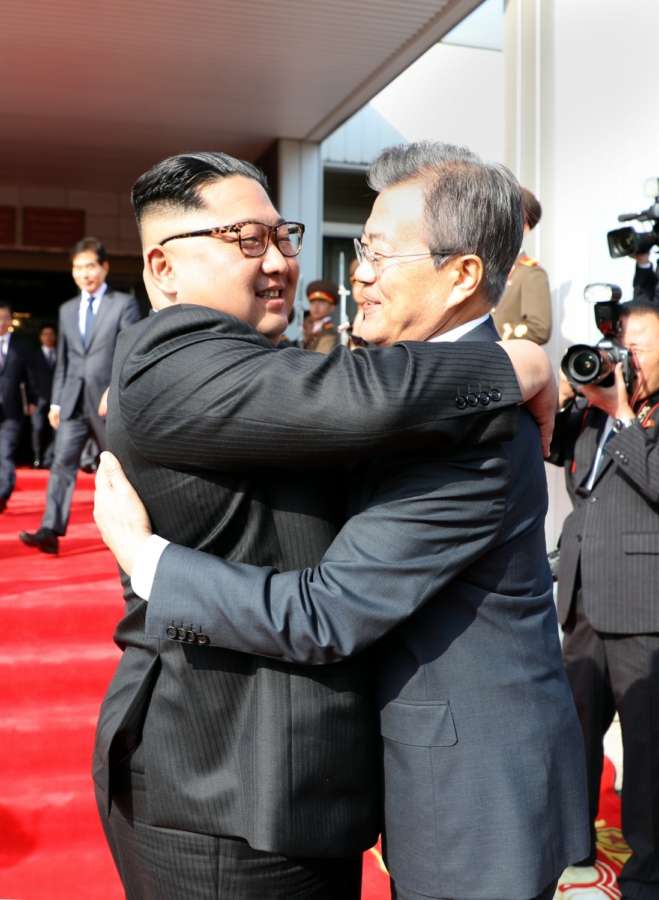 “While explaining the outcome of my summit with U.S. President Trump held last week, I relayed the message that President Trump is firmly willing to end his country’s hostile relationship with North Korea and enhance economic cooperation should Chairman Kim make a decision on complete denuclearization and implements it,” Moon said.

He said his surprise meeting with Kim came at a suggestion from the North Korean leader, who on Friday expressed hope to meet for candid dialogue.

“Also, as both Chairman Kim and President Trump sincerely wish for the success of the North-US summit, I stressed the need for the two sides to remove any misunderstanding through direct communication and to hold enough dialogue on agenda issues that need to be addressed at their summit,” President Moon said, adding, “Chairman Kim also agreed”.

Moon noted his meeting with the North Korean leader may help revive the Trump-Kim summit but said the fate of the historic summit will largely depend on direct dialogue between the two countries.

“All the efforts I am making now are aimed at improving the South-North Korea relationship on one hand, but on the other hand, they are also aimed at holding the North Korea-US summit that is absolutely needed to improve the South-North ties.

“I believe whether the June 12 North Korea-US summit will be disrupted or succeed depends on how successfully (the North and the US) complete their working-level negotiations,” he said.

Meanwhile, Trump said late Saturday that the June 12 summit was still a possibility.

“We are having very productive talks with North Korea about reinstating the Summit which, if it does happen, will likely remain in Singapore on the same date, June 12th., and, if necessary, will be extended beyond that date,” Trump tweeted.