In a tweet, Trump said he wanted to know whether his predecessor Barack Obama’s administration ordered such a move. Trump’s latest demand came amid a series of tweets on Sunday denouncing a “witch hunt” that, he said, had found no collusion by his campaign with Russia….reoprts Asian Lite News 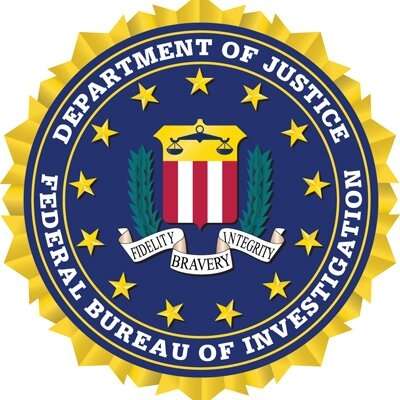 The US Department of Justice will investigate whether FBI agents spied on President Donald Trump’s 2016 election campaign for “inappropriate purposes”, media reports said.

In a tweet, Trump said he wanted to know whether his predecessor Barack Obama’s administration ordered such a move.

“I hereby demand, and will do so officially tomorrow (Monday), that the Department of Justice look into whether or not the FBI/DOJ infiltrated or surveilled the Trump Campaign for Political Purposes and if any such demands or requests were made by people within the Obama Administration!”

“If anyone did infiltrate or surveil participants in a presidential campaign for inappropriate purposes, we need to know about it and take appropriate action,” Deputy Attorney-General Rod Rosenstein said in a statement.

The call comes after the US media reports suggested the Federal Bureau of Investigation had an informant meeting campaign aides. Rosenstein said action would be taken if any infiltration was found, the BBC said. 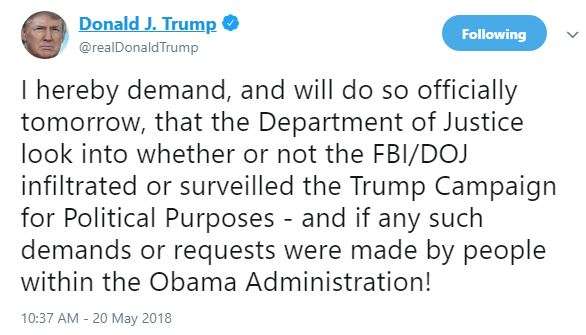 There is already an investigation into all aspects relating to Trump’s campaign for the 2016 election and whether Russia tried to influence the outcome.

Trump’s latest demand came amid a series of tweets on Sunday denouncing a “witch hunt” that, he said, had found no collusion by his campaign with Russia.

This refers to the ongoing investigation led by Special Counsel Robert Mueller into Russia’s efforts to interfere in the 2016 US election, whether there was any collusion between the Kremlin and Trump’s election campaign and whether the president tried unlawfully to obstruct the inquiry.

The New York Times followed with an article that suggested there was, indeed, an FBI informant — whose identity it did not reveal — who had been sent to speak to campaign aides but only after the FBI had received reports of “suspicious contacts linked to Russia”.

Law enforcement officials have refused to provide evidence to Congressional leaders over the issue. They have argued that doing so would put the informant’s life — or that of his contacts — in danger, the BBC said.

Trump could order the US Department of Justice — which has oversight over the FBI — to release the documents.