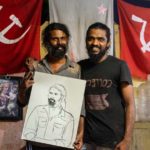 He made the comments while inaugurating the fourth edition of the Kochi-Muziris Biennale.

“Art is necessary for man to be elevated from animal status. The government has been spearheading the rebuilding of the state (post floods in August), but we have not gone back on the grant for the event,” said Vijayan.

The 108-day event that exhibits 94 artists’ works in 10 venues in the commercial capital of Kerala is now billed as the biggest art event in the country.

Curated by eminent artist Anita Dube, with the curatorial theme “Possibilities for a Non-Alienated Life”, it seeks to explore newer access to art practices amid seminars, workshops, lectures, cinema and performances before it concludes on March 29 next year.

Vijayan said the efforts to find a permanent venue for the Biennale was gaining strength, noting that the previous edition (2016) of the event clocked a footfall of six lakh.

Bose Krishnamachari, president of the Kochi Biennale Foundation that is organising the festival, said: “Let this year’s Biennale act as the healer for the natural disaster the state witnessed in the month of August.”

“I thank each and every one present here,” he added.

Dube said the Biennale seeks to blend pleasure with pedagogy and said that the event is divided into two parts — in the first part the exhibits, and the other, the pavilion, where “anyone and everyone” can become a curator.