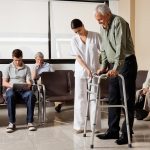 Depression is a major issue affecting millions of people, especially the elderly.

“People engage with culture for the pure enjoyment of doing so, but we need to be raising awareness of their wider benefits too,” said Daisy Fancourt, Senior Research Associate from the University College London in the UK.

The power of these cultural activities lies in the combination of social interaction, creativity, mental stimulation and gentle physical activity they encourage, according to the study, published in the British Journal of Psychiatry.

If we are starting to feel low or isolated then cultural engagement is something simple that we can do to proactively help with our own mental health before it gets to the point where we need professional medical help, according to Fancourt.

“However, such activities on their own don’t treat depression. This requires an approach based on the use of talking therapies, complemented by the use of medication where an older person does not respond or when they have more severe depression,” noted Amanda Thompsell from the Royal College of Psychiatrists.

For the study, the researchers studied more than 2,148 adults above 50.