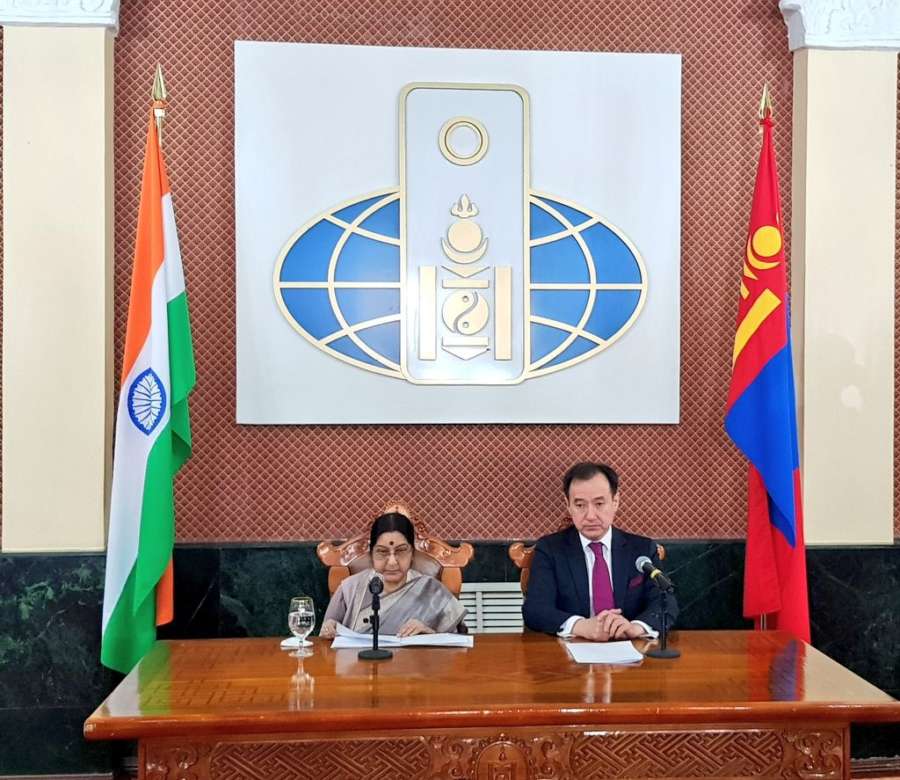 Sushma Swaraj, who arrived in the Mongolian capital here on Tuesday after wrapping up her China visit, also called upon the country’s business community to seize economic opportunities from India’s growth.

She co-chaired the sixth round of the India-Mongolia Joint Consultative Committee (IMJCC), focusing on a range of issues including economic, energy, political, strategic, educational and cultural ties along with Tsogtbaatar.

She is the first Indian Foreign Minister to visit Mongolia in 42 years.

In 2015, Narendra Modi became the first Indian Prime Minister to visit this landlocked Asian country. It had ruffled China’s feathers.

Addressing the media here after the IMJCC meeting, Sushma Swaraj said: “We discussed global challenges affecting humanity, particularly terrorism, and agreed to collaborate bilaterally in the international arena to root out this evil.”

She said India sees Mongolia as a factor of stability in East Asia, adding that the country’s social and economic development is the key to peace and prosperity in the region.

India is currently helping Mongolia build its first oil refinery with a $1 billion line of credit, to reduce its dependence of neighbouring nations.

“We reviewed the progress in our on-going collaborative projects, including the refinery project selected by the government of Mongolia for implementation with the support of $1 billion dollar Indian line of credit.

“We directed our officials to coordinate follow up action on each side for the expeditious implementation of these projects. Our strong political ties must be complemented by commensurate levels of trade, economy and investment.”

Stating that India has today emerged as one of the fastest growing large economies in the world, Sushma Swaraj said that with its rich natural resources and strong aspiration for development, Mongolia can be an important partner in India’s growth story.

“Foreign Minister Tsogtbaatar and I agreed to explore possible ways to identify new areas of cooperation in all sectors of mutual interest and to enhance our bilateral trade and investments. We discussed economic cooperation in areas such as infrastructure development, energy, services and IT,” Sushma Swaraj said.

“I call upon the Mongolian business community to seize economic opportunities arising out of India’s growth.”

In Wednesday’s meeting, both sides agreed to remove institutional and logistical impediments to boost trade, tourism and people-to-people contacts.

“I reiterated to Foreign Minister Tsogtbaatar our continued commitment for capacity building programmes for the people of Mongolia, including in areas such as, training in English language and IT,” the Indian External Affairs Minister said.

She said both the nations have identified new areas of cooperation that include IT, infrastructure, energy and services.

“We look forward to more students visiting India for pursuing vocational education & training under the Indian Technical and Economic Cooperation programme, also known as ITEC, and through scholarships offered by the Indian Council of Cultural Relations,” she said.

“We would encourage students from Mongolia to pursue studies in Indian art, music and culture which would further reinforce our cultural links.”

Later, she called on Mongolian Prime Minister U. Khurelsukh and discussed issues of bilateral cooperation.

According to a tweet by Indian External Affairs Ministry spokesperson Raveesh Kumar, both leaders “discussed cooperation in developmental cooperation, mining, capacity building, IT, films and other areas of bilateral cooperation”.

After calling on the Prime Minister Sushma Swaraj held a meeting with the Mongolian Minister and Chief of Cabinet Secretariat Gombojav Zandanshatar and “had a good exchange of views on expanding cooperation across several sectors”, according to Kumar.

She also called on M.Enkhbold, Speaker of the Mongolian Parliament, the State Great Khural.