For India, this is a seriously worrying development, especially since it has long considered the Maldives as among its few friends in the region…..writes former Indian diplomat Amit Dasgupta 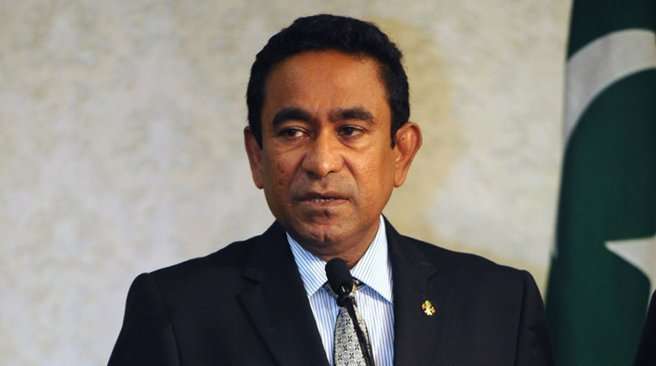 Idyllic Maldives faces a serious constitutional crisis and there are no indications that President Abdullah Yameen is willing to soften his position. On the contrary, all indications are that Yameen would ruthlessly incarcerate the opposition and even prevent the forthcoming presidential elections from taking place.

Like his predecessor, he has assiduously cultivated relations with Beijing. The extension of the emergency, especially after New Delhi expressed its misgivings and concerns, demonstrates how confident he is of China’s support. This is India’s backyard and the dilemma New Delhi faces is not simply how it should respond to the challenge, but how the Maldives slipped away from its hug.

For India, this is a seriously worrying development, especially since it has long considered the Maldives as among its few friends in the region.

Even more worrying is the manner in which the Maldives has allowed China to make strategic inroads, much to New Delhi’s discomfiture and disadvantage. The first real evidence was the arbitrary manner in which the airport project was handed over to the Chinese, even though the contract had been won by an Indian company. This was followed by the opening of a Chinese embassy, the signing of an FTA and rumours that Beijing might be given the right to set up a naval base in one of the islands. What is more disturbing is that increased Chinese presence in the Indian Ocean would mean that Beijing would control yet another important shipping lane.

Anticipating that New Delhi might be provoked into intervening militarily, Beijing followed its stern warning with the dispatch of naval ships. A military intervention, while it is a preferred Chinese strategy, however, comes with serious drawbacks. For one, it is not clear as to who would replace President Yameen. Nor indeed is it clear that it would be swift, successful and bloodless. Further, whether there would be international support in case there is a confrontation with the Chinese navy is a matter of surmise.

More importantly, if it fails in achieving its desired objective, it would damage India irrevocably in the eyes of its domestic constituency, the regional audience and the world at large. Added to this is the disturbing manner in which the Maldives, under President Yameen, has emerged as an incubation hub for Islamic fundamentalists with the credible possibility that a military intervention might provoke retaliatory terror attacks in India.

Nevertheless, an urgent and unambiguous response from New Delhi is warranted. It knows that if the Maldives is lost, a domino effect would follow. There is, of course, every danger that whatever action New Delhi adopts would draw the Maldives even closer to China. Furthermore, what has already been lost to the Chinese is least likely to be reversed.

A measured but tough response appears to be the only option that India has. While military intervention is not the preferred option, it is an available one that the Maldives needs to be made aware of. Sustained financial sanctions and a travel ban would cripple the tourism industry and strengthen opposition from rich Maldivians against Yameen. Simultaneously, back channel communications need to be opened with Saudi Arabia, the UAE, the US and the opposition to isolate Yameen and reduce him to a national liability.

More importantly, India needs to focus more consistently on the neighbourhood to avoid moving from one crisis to another.

(Amit Dasgupta is a former Indian diplomat. The views expressed are personal. The article is in special arrangement with South Asia Monitor)