With a dip in the mercury, the people of Nagaland’s Longleng district have started welcoming their annual winged guests, the Amur falcon…reports Asian Lite News 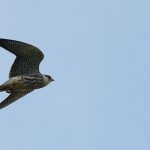 The residents of Yaongyimchen, Alayong and Sanglu villages in Longleng district have ensured the Amur falcons, during their month-long sojourn, could roost there without any threat of poaching. They are likely to stay in the area for about a month before taking off for their wintering grounds in southern Africa.

The Amur falcons are the longest travelling raptors in the world and come to these areas in Nagaland in the hundreds of thousands, say ornithologists.

Until recently, Naga tribesmen would hunt thousands of these raptors for meat. However, after a vigorous campaign by wildlife activists and some local and international NGOs, they pledged to protect the bird and since then their hunting in the area has been minimised.

“The first batch of Amur falcons has arrived at their roosting site. We have noticed about three to four lakh birds, and more will arrive in the days to come,” said Alex, an intern from Dehradun’s Wildlife Institute of India (WII), who is doing his internship in Longleng this year.

These amazing raptors travel one of the longest migration routes of all birds, doing up to 22,000 km in a year and they arrive in Nagaland from Siberia en route to their final destination.

The villages are part of the Yaongyimchen Biodiversity Conservation Zone.

Phom and other volunteers will be on their toes for this whole period to protect the avian guests. All the volunteers will be deployed in shifts across the villages so that not a single bird can be harmed before their departure towards the end of the month.

The local community performs the conservation and protection effort entirely voluntarily and does not receive any money from the government.

“There are other roosting sites in and around Longleng area as well. However, those were not officially recognised by the Nagaland government,” Phom said, adding that birds from the Arctic region have also been spotted roosting at the site

“The Amur falcons make up most of the migratory birds but there are many others which are yet to be identified. More study is needed to identify the birds,” he added.

According to conservation organisation BirdLife International, till five years ago, hundreds of thousands of migrating Amur falcons were being slaughtered annually in northeast India. Today, they are celebrated.

The falcons were trapped, slaughtered or taken to local markets alive and sold as fresh food.

Pangti, the largest hunting village in the area, recently declared a total ban on airguns — a very significant development as it was a common hunting method, said the world leader in the bird conservation.

Furthermore, the village council put a seasonal ban on the hunting of all wild birds, fulfilling another one of the goals of the Bombay Natural History Societyin the area, it added.