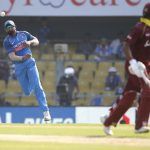 Now there are fears of the net overpowering both the newspapers and television news and cricket’s shorter formats may undergo reforms to suit the digital world, yet there is no talk about the survival of Test cricket.

The future of Test cricket is no longer a major topic, it is the shorter formats that are in trouble as the Bengal Cricket Association found out that people are not interested in watching even a Twenty20 game between India and the West Indies at, of all places, the Eden Gardens.

The organisers have a ready explanation for the lukewarm response — the high cost of tickets and the absence of stars (read Virat Kohli). The one advantage is that a T20 game can be accommodated in a reasonable time frame, though a truncated game, say five to ten overs, can make a mockery of the sport.

The England Wales Cricket Board, which introduced the Twenty20 format to bring the crowds back to the grounds, now formulated a 100-ball cricket with 15 overs plus a ten-ball one over! All the English cricketers, former and contemporary, are enthusiastic about it, but Virat Kohli is opposed to too much tinkering with the system.

In the 100-ball format, there is a major hitch, the 10-ball over needs the MCC’s approval as custodian of the game’s rules.

Even if cricketers are not so enamoured about the frequent changes in the formats, the administrators and the fans are impatient, they are looking at a cricket game comparing with a movie, which in less than three hours, is more captivating with a brief break. The idea of a T20 was that it should finish in a shade less than three hours, but it invariably goes to four hours with a legitimate break and a few avoidable disruptions. The disruptions are more in the Twenty20 leagues for commercial breaks.

Then there are T10 matches being played in places where cricket is still catching the imagination of the people, graduating from six-a-side format. Some event tried beach cricket without much success, except, perhaps, in the Caribbean.

Let the administrators scratch their heads to come up with the right potion to tickle the fan, but for the time being worry about the existing formats and how best they can make them work.

The three-format compass is getting a bit too much for players like Kohli, as it was for Mahendra Singh Dhoni and AB De Villiers, both of whom made adjustments or quit a couple of formats to keep themselves available for the highly lucrative commercial leagues.

Look at the number of cricketers who have opted out of international cricket to concentrate on the global circus of leagues, some playing practically in every league right through the year. More and more youngsters are getting attracted to the shortest format, not making any serious effort to play for their countries in the longer formats.

The broadcasters and the administrators of the game are also worried about the top players’ picking and choosing their games just as it happened with Eden Gardens. The fans’ argument is if they are not going to see Kohli bat why bother to go all the way to the stadium hassling themselves. In this case even some of the West Indies entertainers have skipped the tour.

Soon the fans might prefer the champion side of the domestic league, Deodhar Trophy, if not the Indian Premier League champions, playing a visiting side. The board’s cricket committee experimented including the Vijay Hazare champions in the three-team Deodhar Tournament for three years before scrapping it this year to give a wider section of players an opportunity.

The Indian board is considering allowing domestic players, if not internationals, to play in the global leagues and once the clearance is given the canvass will be a big one for them.

Right now the board has allowed women cricketers to play in Australia’s Big Bash and in Women’s Cricket Super League in Britain where Indian opener Smriti Mandhana had been a big hit. Having turned out for Brisbane Heat in the second edition of the Big Bash, she was a smashing hit for Western Storms in the English league, scoring 387 runs at an average of 77.40 and an astonishing strike rate of 185.16.

India’s T20 captain Harmanpreet Kaur has been given a two-year extension by Sydney Thunders after her exciting performance in the Big Bash and she and Mandhana have paved the way for others like Veda Krishnamurthy and Deepti Sharma to move up the ladder.

The men are looking forward to get into the race.