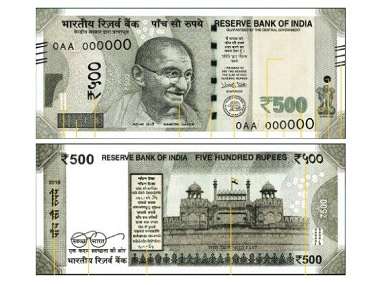 To meet the “unusual” currency demand in the country, the government has decided to increase printing of Rs 500 notes by five times, Economic Affairs Secretary Subhash Chandra Garg said here on Tuesday.

“We keep Rs 2.5-3 lakh crore more currency in stock for excess demand. In the last few days, we have pumped cash into the system to meet the demand. We still have a reserve of Rs 1.75 lakh crore.”

He said there was “unusually high demand” for currency in the last couple of months. As opposed to an average demand of about Rs 20,000 crore a month, “in the first 13 days of April itself there was a demand of Rs 45,000 crore”, he said.

“This unusual spurt in demand is seen more in some parts of the country like Andhra Pradesh, Telangana, Karnataka, Madhya Pradesh and Bihar,” the Finance Ministry said in a statement on Tuesday.

“We have noted that this is coming more from some parts of the country. There might also be some sort of a feeling in some people that if the cash runs out, why not keep it in reserve so it may be safe… a kind of ‘shortage mentality’. But believe us, there is no shortage, there is no cash crunch,” he said.

“There is no shortage of notes in stock, there is no shortage of cash being printed… Therefore I would urge… every citizen not to hoard or stock cash — it is not required. You are unnecessarily raising your risks. We have adequate cash, but the preferable mode of use is digitisation, so use it,” Garg added.

Asked whether there was any hoarding of the Rs 2,000 notes, he said: “In this system, there are about 6.70 lakh crore worth of Rs 2,000 notes. They are more than adequate to meet the transaction demand of customers… But, off late, we have noted somewhat lesser inflow coming back from circulation.

“We have not got this investigated, but you can assume that this one note is most suitable for people to keep with themselves. There has been some tendency of some people using Rs 2,000 notes, but that does not affect the overall supply of the Rs 2,000 notes.”

“But demonetisation is one-and-a-half years earlier… if we had taken that growth path, we would had still been much higher. If the currency had grown as it was growing before demonetisation, probably it would have been somewhere at the level of Rs 22-23 lakh crore. So, we are at a lower level.”

With ATMs suddenly running dry in several states, Congress President Rahul Gandhi on Tuesday said the “terror” of demonetisation has returned to haunt the country, slamming Prime Minister Narendra Modi for what he described as destroying India’s banking system.

He took to Twitter to take a poetic dig at the Prime Minister and also spoke to reporters here, alleging that Modi has assured “acchhe din” for fugitive jewellers Nirav Modi and Mehul Choksi, leaving the poor of the country high and dry.

“Understand the deceit of demonetisation, your money goes into the pocket of Nirav Modi. Modiji’s fascination for (Vijay) Mallya, the terror of note-bandi spreads again. The ATMs of the country are empty again, what is the condition of banks,” Gandhi asked on the second day of his two-day visit to his parliamentary constituency.

He criticised Modi for his silence on the banking frauds allegedly committed by the diamond merchants who have fled the country.

“We were forced to stand in queues as he snatched Rs 500-1,000 notes from our pockets and put them in Nirav Modi’s pocket.”

He was replying to reporters’ questions about the current cash crunch with ATMs running out of notes across the country.