Prime Minister Narendra Modi on Thursday said India’s military aims and preparedness were driven not by a desire to conquer anyone’s territory but to protect its own people….reports Sarwar Kashani from Chennai

Addressing a gathering of mostly foreign dignitaries and captains of foreign and local military manufacturing companies, Modi said India, the land of Buddha, had always believed in winning hearts and not land.

“Thousands of years of history of India shows that we have never desired anyone’s territory. Rather than winning countries through wars, India has believed in winning hearts.

“This is the land from where the message of peace and universal brotherhood has gone out since Vedic times,” Modi said in a 30-minute speech at a defence trade fair that projects India as one of the major manufacturers of war machines in the world. The event is taking place in Kancheepuram district, about 40 km from the heart of Chennai.

“This is the land from where the light of Buddhism spread to the world. In fact, from the time of Ashoka The Great and even earlier, India has believed in using strength to protect the highest ideals of humanity.”

The Prime Minister praised Indian armed forces’ contribution to world peace and said that in modern times more than 130,000 Indian soldiers sacrificed their lives in the two World Wars.

“India had no claim on territory. But Indian soldiers fought for restoring peace and upholding human values,” he said and added that independent India had also sent one of the largest numbers of UN peacekeepers to places all over the world. 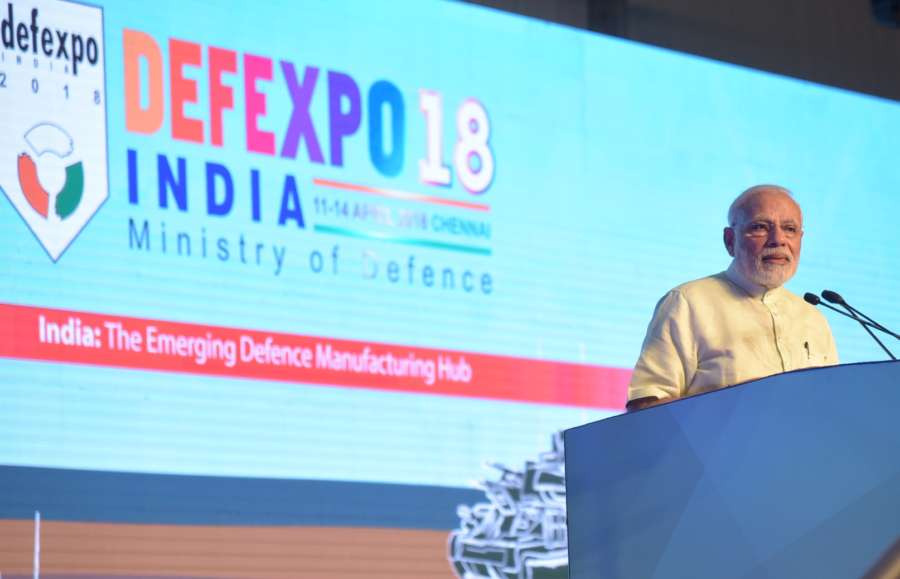 He said while maintaining peace was primary, at the same time, the State had an important responsibility to protect its own citizens.

Referring to Kautilya, he said the ancient Indian thinker wrote the ‘Arthashastra’ treatise more than 2,000 years ago, saying that the ruler must protect his people and that peace is preferable to war.

“India’s defence preparedness is guided by these thoughts. Our commitment to peace is just as strong as our commitment to protect our people and our territory. And for this, we are ready to take all steps required to equip our armed forces, including through the establishment of a strategically independent defence industrial complex.”