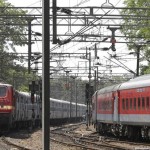 In a meeting with senior officials of Mumbai Metropolitan Region Development Authority and Gujarat’s Urban Development and Municipal Commissioners, it was decided to take the help of Japanese experts in developing the areas around the stations — connecting them to bus, metro and other forms of transportation, a senior Indian Railways official in the know told IANS.

Railways will adopt a “transit-oriented development plan” for all these stations so that each becomes a commercial hub ensuring smooth connectivity with the outside world.

In urban planning, transit-oriented development is a type of urban development that maximises the amount of residential, business and leisure space within walking distance of public transport.

“There will be scope of constructing housing complexes near some stations as per the plan,” the Railways official added.

The terminal building, which will have space for commercial activities like eateries, forex counters, malls and parking lots, will also be a major interchange hub, providing passengers seamless connectivity between the bullet train network and other services such as the metro and bus services, as well as last-mile connectivity.

“Unless the stations are well-connected with neighbouring districts, the bullet train service will not attract the ridership required to make the project viable,” said the official.

The bullet trains are expected to run at 350 km per hour covering the 508 km stretch in about two hours. In comparison, trains currently plying on the route take over seven hours to travel the distance, whereas flights take about an hour.

Railways will have two distinct schedules for the bullet trains. The faster route will stop at fewer intermediary stations, which will include Surat and Vadodara, before reaching Ahmedabad, while the other will stop at all stations.

The development of 12 stations and its adjoining areas is expected to be a boon for economic activity in the region.

The 508-km high speed train corridor between Mumbai and Ahmedabad is expected to be operational by August 2022.