Cross-dressing is generally not received well, but at the Kottankulangara Devi temple at Chavara near Kollam, it’s different — hundreds of men cutting across religions dress up like women as part of a traditional ritual to please the deity and get their wishes fulfilled….reports Asian Lite News

Previously only the locals would take part in this ritual at the temple located about 80 km from state capital Thiruvananthapuram but things have changed now. On Saturday night, it was not just Keralites but men from outside the state and even foreigners from New Zealand and London who joined the festival.

In the 19-day-long temple festival, it is on the last two days that this ritual named “Kottankulangara Chamayavilakku” takes place, according to the president of the temple committee G. Hari Kumar, who told media that this time over 5,000 people — both men and boys — turned up dressed as women or girls for the prayers. Around the same number of people came to watch the fest.

There are several stories about the origin of the festival but the most popular version says a group of boys who used to herd cows would playfully dress up as girls and offer flowers and a coconut dish called “kottan” to a stone.

Folklore has it that the goddess appeared before one of the boys, and subsequently a temple came up and the ritual of cross-dressing to offer prayers to the goddess got under way.

This stone has now come to be regarded as the temple’s deity, and some say the stone has been growing in size over the years.

While some of the devotees are dressed up by their female family members, there are now a good number of beauticians and makeup artists around the temple who charge between Rs 500 and Rs 2,000 for decking up the faithful. 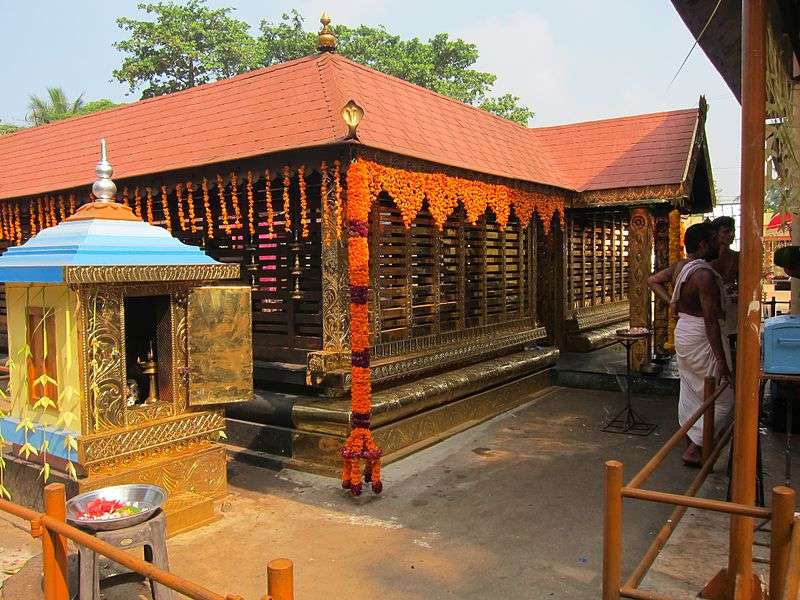 Sunil Master, 45, a dance master, who is also a makeup man whose team has been dressing up men into women, told that he has been doing this job for over a decade now.

“Yesterday (Saturday), I had 20 clients… I take around 45 minutes. While one of us does the makeup, another team works to fix the ladies’ hair and yet another group dresses them up in either saree, or traditional Kerala salwar-kameez or Kerala skirt and blouse.

“People are quite serious about it and no one makes fun of a man dressed as a woman as this is a ritual,” said Sunil Master.

Although the most auspicious time for taking part in the ritual is between 2 a.m and 5 a.m, due to the huge rush, as dusk descends one can see a stream of “women” carrying lamps making a beeline for the temple. The lamps are also available on rent.

They perform a parikrama around the temple. While some leave after it, others stay back till 6 a.m or so and then leave the temple premises with happiness writ large on their faces.

Thirty-year-old Deepu Yashodharan, who works in the Middle East and came only to take part in the festival, told that this is the third time that he dressed up as a woman.

“After I took part on two previous occasions, all my wishes came true. Personally for me, I feel the deity here is very powerful. For 30 days, I don’t take any non-vegetarian food,” said Yashodharan.

Incidentally, this is the only temple in Kerala which has no roof over the sanctum-sanctorum.