The Uttar Pradesh government is set to chop about 55,000 trees in critical tiger habitats to build a road of strategic importance…reports Asian Lite News 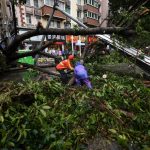 According to a document accessed by IANS, the over 500-km-long Indo-Nepal Border Road project has been undertaken by the Public Works Department (PWD) of Uttar Pradesh. The road cuts through two tiger reserves and three wildlife sanctuaries spread across six districts along the Nepal border.

The official document states that of the 55,000 trees marked to be axed, many are over 200 years old.

The project area, in the Terai region, is home to several endangered species of animals, including the tiger, leopard, bear, Swamp deer, Spotted deer, Hog deer, Barking deer and many other species of reptiles and bird.

The road project demands a land of 287 hectares in the protected forest areas.

The region has mixed species of trees, with a maximum cover of Sal, Jamun and Teak forest system.

According to officials, the road is of strategic importance as it will connect the border outposts being guarded by paramilitary force Seema Suraksha Bal (SSB) along the India-Nepal border.

“The project is situated in the protected area,” the document states and asks the forest, PWD, SSB and tiger reserve officials in Pilibhit, Lakhimpur Kheri, Bahraich, Shravasti, Balrampur and Maharajganj districts to survey the area.

“Following the survey, the teams shall do required revision of project to reduce the impact that includes fragmentation of wildlife habitat and to deforestation as 55,000 trees had been marked, coming in way of the project, and of which many are over 200 years old,” said the minutes of the meeting held by the State Wildlife Board.

According to the officials involved in the project, the construction work shall begin in November 2018 and the road is to be constructed along the Nepal border and passes through the core area of the forest.

“Yes, about 55,000 trees are to be chopped for the project. It will affect the wildlife for sure,” said an official who requested anonymity. He, however, added that Uttar Pradesh Chief Minister Yogi Adityanath had ordered officials to work out a strategy to minimise the impact.

According to Noida-based environment and RTI activist Vikrant Tongad, there are alternatives to cutting down the trees.

“The government can opt for elevated roads and protect the forest, wildlife and important green corridors. Fifty-five thousand trees is a very big number and the Uttar Pradesh government must understand its importance,” Tongad told IANS.

The forest officials told IANS that the road cuts through green corridors between the protected areas of Nepal and India.

“The forest headquarters in Lucknow has asked us to take mitigation measures through realignment of the road project area, by bringing diversions in the routes,” said a forest official, requesting anonymity.