Italy’s hardline Interior Minister Matteo Salvini  vowed to end the trafficking of migrants to Italy, warning “the party is over” for those who profit from the criminal phenomenon…reports Asian Lite News 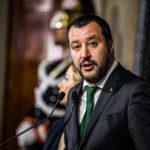 “Under my watch, mass immigration will no longer be a racket – the party is over,” Salvini said in a statement.

Salvini took aim at Domenico Lucano, Mayor of the migrant-friendly southern Italian town of Riace, who was held in early October on charges of aiding illegal immigration and fraudulent management of waste disposal services, according to prosecutors in Reggio Calabria.

“I see what’s going on in Riace: the Mayor is under house arrest and keeps airily inviting journalists to his home,” Salvini said.

Lucano allegedly assigned trash-collection services to migrant cooperatives without a public tender, according to the charge-sheet.

He gained worldwide fame for welcoming migrants, hundreds of whom have settled in the small town of fewer than 2,000 inhabitants.

The Interior Ministry will carry out its own investigation of the illegal immigration “business” starting with the centre-left government that ruled Italy from 2013-18, Salvini stated.

“No one is calling for the law to be upheld or is defending the Public Prosecutor’s Office, not even Italy’s national association of magistrates,” Salvini said, pointing the finger at “leftwing” politicians and allegedly leftist judges.

Over 700,000 migrants and refugees have arrived in Italy since 2014, fleeing conflict, persecution and poverty in their homelands.