With 53 countries covering 2.4 billion people spreading over Africa, the Caribbean, Indian Ocean and the Pacific, the historical 25th Commonwealth Heads of Government Meeting (CHOGM) held in London. On the second day, the heads of government met for the leaders’ retreat at Windsor Castle, which concludes the Commonwealth Heads of Government Meeting in the UK. In the meeting, it has been confirmed that Prince Charles will take over from the Queen as the next head of the Commonwealth….reports Aravind Rajeev 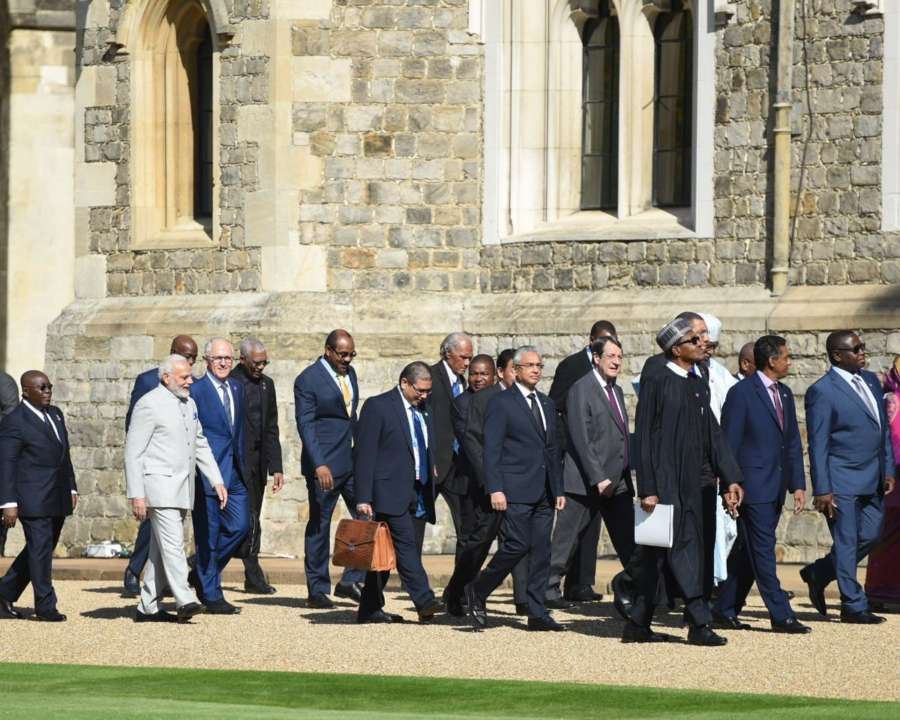 As expected, on the second day of the summit, Commonwealth leaders have voted for Prince Charles to succeed the Queen as head of the Commonwealth.

At the opening of the summit yesterday, British Prime Minister Theresa May highlighted everything from free trade to cybersecurity, preservation of the rules-based order, democracy and climate issues.

She told the leaders the summit would “take on some of the 21st Century’s biggest questions”.

Meanwhile, as the host of CHOGM 2018, Britain’s Queen Elizabeth II has asked Commonwealth leaders gathered at Buckingham Palace for the opening of a major summit to appoint her son Prince Charles to succeed her as their head.

She said it was her “sincere wish” that Prince Charles takes over “one day.” 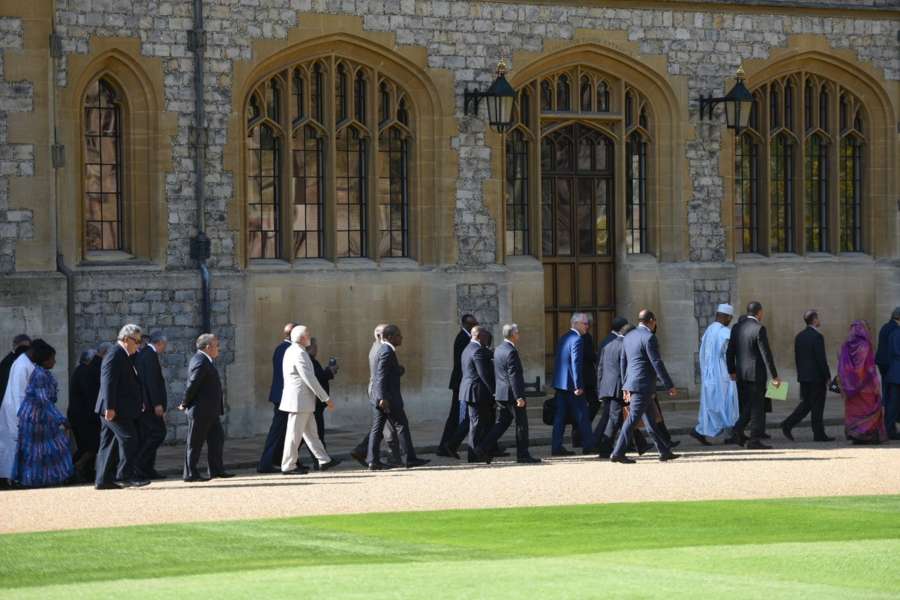 “It is my sincere wish that the Commonwealth will continue to offer stability and continuity for future generations, and will decide that one day the Prince of Wales should carry on the important work started by my father in 1949,” she told the leaders.

On the second day, heads of government met for the leaders’ retreat at Windsor Castle, which concludes the Commonwealth Heads of Government Meeting in the UK.

The closed-door meetings comprise the informal segment of CHOGM, where the leaders meet without any pre-set agenda and without the presence of their close aides.

At the opening of the summit, over 100 officers and soldiers from the Coldstream Guards were in honour guard outside the venue, wearing scarlet tunics and bearskins, as a 53 gun salute marked the formal opening.

Issues under discussion at the two-day summit included ocean conservation, cyber security and trade between the countries. 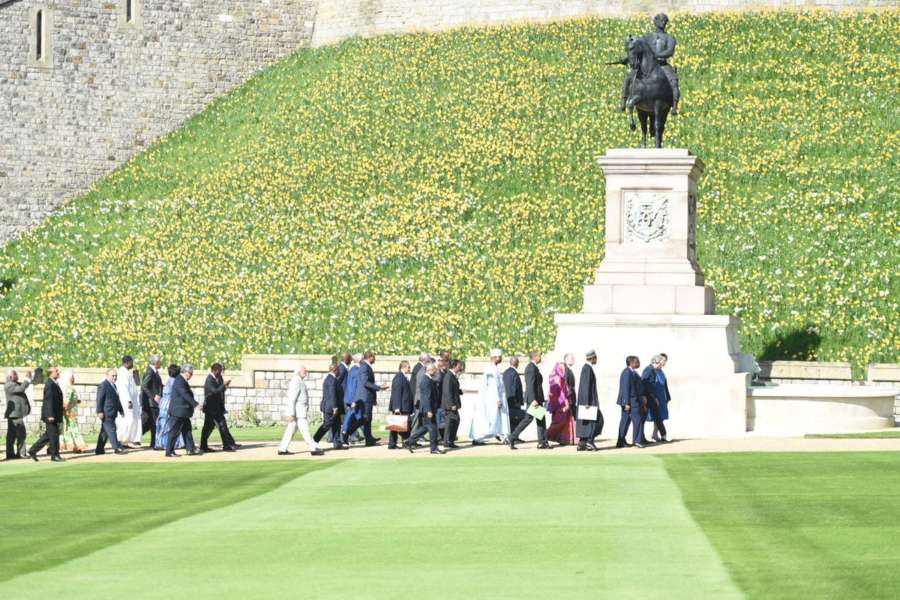 The ceremony was attended by 46 Commonwealth heads of government, out of the 53 member states, with the remaining attendees being Foreign Ministers of different countries.

In the opening ceremony, the 69-year-old Prince said: “For my part, the Commonwealth has been a fundamental feature of my life for as long as I can remember, beginning with my first visit to Malta when I was just five years old.

“The modern Commonwealth has a vital role to play in building bridges between our countries.”

Camilla, Duchess of Cornwall, Prince Harry and Prince William were among the other royals in attendance.

Coming to the Indian perspective, its diplomatic reach-out across the Commonwealth nations, Prime Minister Narendra Modi met a number of leaders from various parts of the world. 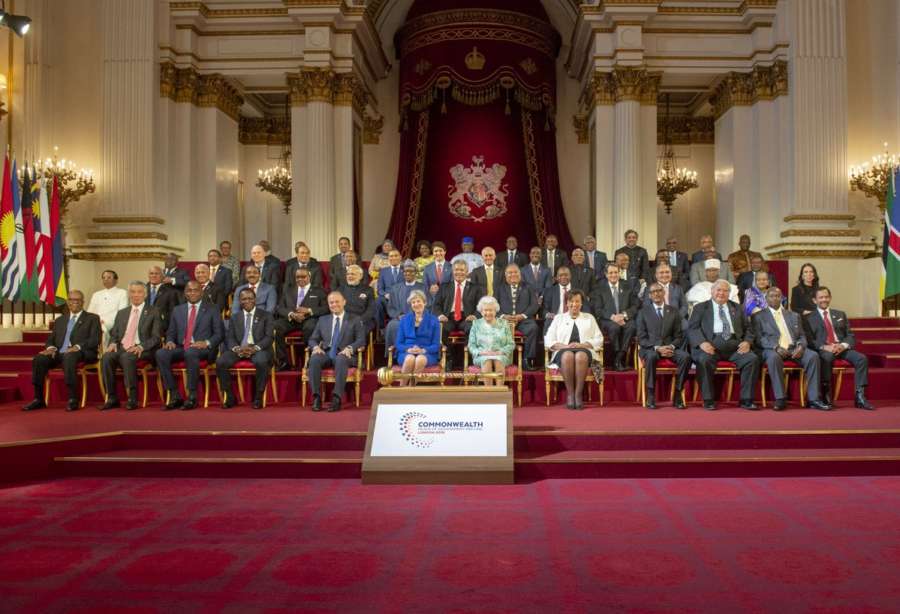 India, which is home to half of the 2.4 billion population of the Commonwealth, is expected to play a catalytic role in reinvigorating the organisation which had lost its relevance over the years in an increasingly multipolar world.

Modi appearance at the CHOGM is the first by an Indian Prime Minister in nearly a decade – with the last one being Manmohan Singh at Port of Spain in 2009.

As per official reports, India is the fourth largest contributor to the Commonwealth budgets and programmes.

India has been increasingly reaching out to these Pacific island nations given their vulnerability in the face of climate change and their stakes in the blue economy.

Fiji is also home to a large number of people of Indian origin, who constitute around 37 percent of the country’s total population of nearly 900,000. Most of them are descendants of indentured labour taken from India in the 19th and early 20th centuries to work in the sugarcane plantations there.

India sees both Mauritius and Seychelles as important stakeholders in the blue economy and Modi has made official visits to both these countries.

Significantly, all these nations whose leaders Modi met are prospective members of the India-initiated International Solar Alliance (ISA).

Launched by Modi and then French President Francois Hollande at the Paris climate summit in 2015, the ISA was conceived as a coalition of solar resource-rich countries to address their special energy needs and provide a platform to collaborate on dealing with the identified gaps through a common, agreed approach.

The UK also joined the International Solar Alliance ahead of Prime Minister Modi’s arrival. Rt. Hon Penny Mordaunt MP, UK Secretary of State for International Development signed the Framework Agreement of the ISA. UK became the 62nd signatory member of the ISA. A total of 23 Commonwealth Countries are members of the ISA.

It is open to all 121 prospective member countries falling between the Tropics of Cancer and Capricorn.

The event also saw India’s absence from Malaria Summit alongside CHOGM, despite having the third largest malaria cases in the world after Congo and Nigeria.

There was no representative from India to participate in the summit which expected world leaders, mainly from malaria-risk countries like India.

The CHOGM Summit held for two days in the British capital, and the first held in UK since 1997, was a moment to show if the Britain can still shape the world even after the exit from the European Union, by renewing the old (colonial) friendships.