Tourism benefit predicted for the North as UK is the second most popular long-haul destination for Indian visitors…writes Asian Lite News.  Return fares including taxes start from: £391 (economy) and £1,458 (business class) 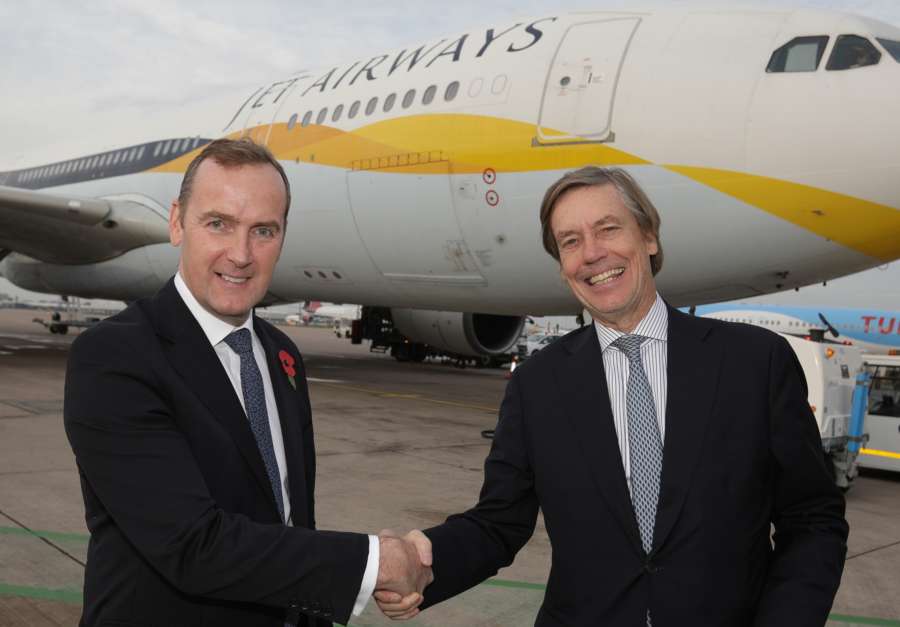 Jet Airways’ five-times-a-week service takes off for the first time this morning, at a celebration attended by Aviation Minister, Baroness Liz Sugg and hundreds of guests from across the region.

The route will unlock £400 million pounds of trade, investment and tourism benefits within five years, according to a report released to coincide with the launch. It follows a sustained push from Manchester Airport and regional partners to establish the first ever link between the North of England and Mumbai, driven by the increasing economic ties between the two regions and increasingly strong demand to travel between them.

The study, called The Northern Powerhouse and India: Unlocking the Opportunity, predicts an economic boost to the North of at least £400m in the next five years.

It describes the North as the “ideal collaborator” with India, with its strengths in areas like digital, advanced manufacturing and energy perfectly aligning with Indian Prime Minister Narendra Modi’s economic priorities.

“Connections like the one being launched today are key to Britain’s economic future and will help to drive economic growth and trade both here in Manchester and right across the North. Co-operation, trade and tourism with India is set to grow over the coming years, and we are committed to helping build the links we need now, so that all areas of the UK can be well placed to make the most of that growing relationship,” said British Aviation Minister Baroness Liz Sugg.

Jet Airways will fly from Manchester to Mumbai on a Monday, Thursday, Friday, Saturday and Sunday and will operate on an A330-200, with 254 seats across Première (business) and economy classes. India is the UK’s seventh largest trade partner in goods outside of Europe and third largest exporter of services to the UK.

Its current economic growth (7-8% per annum) has seen foreign direct investment into the UK create around 6,000 new jobs. That is why securing a direct service was a long-term priority for both Manchester Airport and the region, leading to the formation of an award-winning public/private body, the Manchester India Partnership (MIP), earlier this year.

“India is one of the world’s most important markets and this route will unlock huge opportunities for economic and cultural collaboration with the North.

“It underlines the importance of direct connectivity, which helps businesses export their goods and services, attracts investors to the UK and encourages tourism in both directions.

“I want to take this opportunity to thank Jet Airways and all those involved with the Manchester India Partnership for making this long-held ambition a reality.”

“We are happy to be the first airline to offer a non-stop, premium service between Mumbai and Manchester,” said Naresh Goyal, Chairman of Jet Airways. The UK is a very important destination for Jet Airways and with the addition of Manchester we hope to make a further contribution to boosting tourism and trade between the two countries.”

Jet announced its Manchester-Mumbai route in May as a four-times-a-week service. Demand has been so strong, the airline increased its frequency to five-times-a-week before it had even launched, with the first flights leaving Manchester fully occupied.

This reflects the powerful role the service will play in facilitating trade, investment and other economic activity between the two locations.

The Unlocking the Opportunity report, published by the Manchester India Partnership, said the route will enable at least £300m of trade and investment benefits, as more Northern businesses start exporting and a raft of fast-growing Indian firms are encouraged to set up bases here, creating more than 2,000 jobs in the process.

The report’s findings were welcomed by Dr Liam Fox MP, Secretary of State for International Trade, who said: “As we look to build a balanced and globally competitive UK economy, our links with high growth markets like India will be critical.

“That is why direct connectivity provided through routes like Jet Airways’ Manchester-Mumbai service are so important. The service will help us attract more visitors and investors to the UK, as well as opening up trade and collaboration opportunities for businesses and universities across the North.

“My international economic department has a range of support available to businesses looking to make the most of the new flight route, including finance through our award-winning export credit agency, UK Export Finance, and market advice from our in-country HM Trade Commissioner, Crispin Simon.”

The Manchester-Mumbai link was welcomed by business groups in both the UK and India.

Carolyn Fairbairn, CBI Director-General, said: “It’s fantastic that Manchester Airport is expanding its route network by adding this direct service to the vibrant economic powerhouse that is Mumbai. Expanding our aviation capacity, and creating new flight routes to rapidly growing markets, is mission critical to ensuring Britain can compete on the post-Brexit world stage.

“These new air links will unlock growth and help create jobs at home, and enable more businesses – especially our many innovative and ambitious small and medium-sized ones – to export their goods and services to booming markets.”

Chandrajit Banerjee, Director General, Confederation of Indian Industry (CII), said: “The newly launched direct flight connection from Mumbai to Manchester is only the beginning of a new era in increased business opportunities between India and the North of England.

“The publication of this report not only highlights, but confirms our longstanding confidence in the strength of the UK India economic relationship. The time is opportune for the two countries to encourage this partnership and grow together.”

Visitor attractions across the North are set to benefit to the tune of £12m a year, with tens of thousands of Indian tourists set to travel into the region on the service.

VisitBritain Director Patricia Yates said: “Inbound tourism is one of Britain’s most valuable export industries and we want to provide a world-class experience to the millions of visitors who travel here every year, more than 70% of whom arrive by air.

“Increasing airline route connectivity and seat capacity into Manchester, the north’s global gateway, is a crucial part of our competitive tourism offer. We saw record visits from India last year and the new direct route from Mumbai into Manchester will help build on this growth, making it easier for visitors to travel, to explore more and to boost growth from tourism across the country.”

The inaugural celebrations included Indian dancing, the airport choir and a multi-faith traditional Indian blessing. They were attended by public and private sector leaders from across the North.

Sir Richard Leese, Leader of Manchester City Council, said: “Mumbai is a thriving, lively city and the launch of Manchester’s first direct route there is a hugely significant development, which will see the the city and wider region grow its links with India’s financial powerhouse. The better connected Manchester and the North is nationally and internationally, the better placed we will be to compete on a world stage, attracting jobs, investment and visitors. This announcement further strengthens Manchester Airport’s status and Manchester’s position as a global hub.”