The Mayor of London has announced plans for this year’s Vaisakhi festival on Saturday 28 April. The celebration of Sikh culture and heritage will take place in Trafalgar Square following the successful return to the central London location last year….reports Asian Lite News

Vaisakhi festival is a celebration of Sikh and Punjabi tradition, heritage and culture, commemorating the birth of the Khalsa (the inner core of the Sikh faith) over 300 years ago as well as marking the Punjabi New Year.

Together with representatives from across the Sikh community, the Mayor of London has created a family-friendly programme filled with the best of Sikh culture and heritage. Highlights include live stage performances of kirtan and dharmic music and volunteers from the Sikh community will treat the audience to langar (free food). The food will be made fresh on the day and will be free to everyone joining the celebrations in the Square, and there will also be a range of street food stalls, such as sugar cane, ice golas and coconut milk. Visitors to the Square will also have the opportunity to learn about the Sikh community through a range of stalls on the day and art exhibitions by Sikh artistsfrom around the world. With turban tying demonstrations, sports activities and children’s arts and crafts, there is something for everyone. 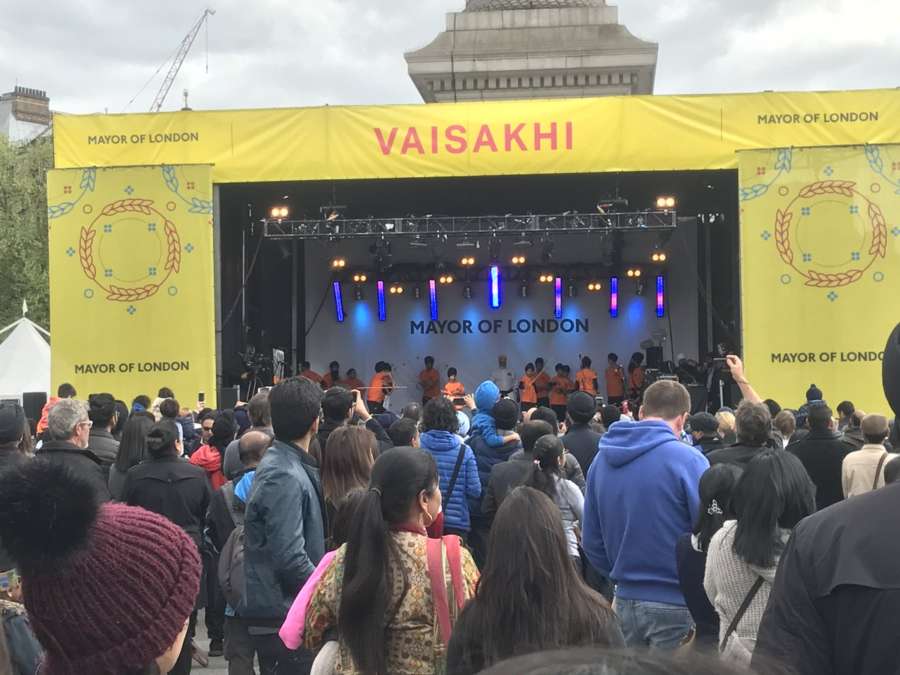 The performances on the main stage in Trafalgar Square will be hosted by Harjap Bhangal, a lawyer who hosts TV show Legal Solutions and Harpz Kaur from BBC Asian Network. The world-class musicians leading the dharmic and Gurbani kirtan music-making, include the internationally renowned Lehmber Hussainpuri, London’s own Golden Roots and Qi-Rattan. Younger performers include Manvir Singh Mani, who made the 2017 final of Voice of Punjab and Karanjit Singh from Dharam Seva records.

The event will also pay tribute to the Sikh soldiers who exhibited extraordinary bravery and sacrifices in the service of Great Britain during both World Wars, through a WWI Sikh soldier re-enactment.

To mark the centenary year since the first women secured the right to vote, and as part of the #BehindEveryGreatCity campaign, the Vaisakhi celebrations will shine a light on the great female figures of Sikh history and reflect on the role played by Princess Sophia Alexandra Duleep Singh in the Suffrage Movement 100 years ago.

The Mayor of London, Sadiq Khan, said: “I am delighted to be hosting London’s Vaisakhi celebrations in Trafalgar Square again this year, and to join the Sikh community at this fantastic event.

Lovepreet Singh Samra, Vaisakhi Steering Group, said: “Vaisakhi is a special day for Sikhs as well as many Hindus across the globe. The celebration has inclusivity at its core, and the Trafalgar Square event is open to the whole of London, and beyond – there will be something for everyone.”

Manraj Singh Othi, Vaisakhi Steering Group, said: “As both Londoners and Sikhs, we feel the grassroots programme focusing on seva, kirtan and langar will create a day that is inclusive for both Sikhs and non-Sikhs alike. We welcome Londoners from all faiths, beliefs or none to enjoy, learn and celebrate together through a diverse range of colourful displays and engaging activities including a Sikh art exhibition and the first ever London Turban day”.