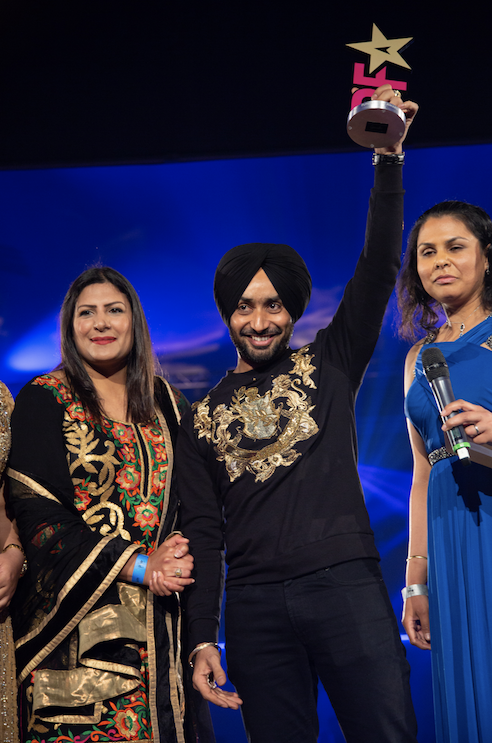 The ceremony was hosted by Punjabi superstar, Jasmine Sandlas, who also performed during the evening alongside Harrdy Sandhu, Sharry Mann, UK born Gurj Sidhu and Sunanda Sharma. The audience was further blown away by a special, surprise guest performance by celebrated Punjabi singer and international superstar, Satinder Sartaaj as well as the appearance of actor and singer Gippy Garewal.

The night was a huge success, with all the nominees and winners being deservingly celebrated and acknowledged for their work and contribution in putting Punjabi cinema on the map, honoured in the UK on one platform for the very first time.

Gurpreet Ghuggi said: “Today is a big victory for Punjabi cinema. Not only will I congratulate Tony Shergill and BritAsia TV but I will congratulate the whole of Birmingham as you have done something extremely great for the future of Punjabi cinema.”

Satinder Sartaaj said: “I am extremely overwhelmed. It’s the first time these awards are happening in the UK, and I really appreciate that. Being a part of international cinema, and being a part of the history of Sikhism with The Black Prince – it is really honourable for me. I was only able to do this because of the Punjabis residing all over the globe – the love and affection and their wishes are the treasure of my life. I am so thankful and have such gratitude for the Punjabi diaspora residing here in Birmingham, in the UK, as well as across Europe. Thank you so much BritAsia TV, thank you so much Birmingham.”

Gippy Garewal said: “I am very pleased to be here and being honoured in the UK at the very first Punjabi Film Awards in the UK by BritAsia TV.”

UK fans of Punjabi cinema were treated to a spectacular evening of glamour and entertainment while honouring the industry, which has grown in prominence on the world stage in recent years.

Tony Shergill, CEO of BritAsia TV, said: “This achievement and milestone moment belongs to all Punjabis around the world, thank you to all the Sponsors, Performers and Actors that made this amazing event come true to create history in the UK. The Punjabi Film Awards 2018 was held for the first time in the UK, in the city of Birmingham and we will continue to work harder for 2019, which may take place in London next year